A no-sweat guide to the world's most famous race

For most of the country, the third Monday in April is nothing more than the start of another work week. The weekend's over and it's back to the grind. But for many people in Massachusetts, the grind can wait because of Patriots' Day, a legal state holiday to honor the start of the American Revolution.

It's also the day that marks the running of the Boston Marathon, the oldest and most prestigious annual marathon in the world. The race attracts more than one million spectators and 25,000 runners, a far cry from the 15 runners that took to the course for the inaugural race in 1897.

Boston's legendary course has the reputation of being both gorgeous and nasty at the same time. Its hills have swallowed even the most elite runners.

Designed in 1897 by John Graham and Henry Holton, it was modeled after the original marathon in Greece, which was generally flat for the first half, with a series of hills between miles 15 and 20 and a steep descent to the finish. The course has been described by one race alumnus as "14 miles of fun, 8 miles of sweat and 4 miles of hell."

See it for yourself (without all the sweat):

Hopkinton is a rural, peaceful town whose spacious Common makes a perfect setting for pre-race festivities. In the hours before the race, the town is alive with spectators milling and runners stretching, drinking and . . . well . . . relieving themselves for the final time before the gun goes off. At 9:22, the gun sounds and the wheelchair competitors are off and rolling. Ten minutes later, the elite women start their race. The elite men and wave one begin at 10:00, with wave two rolling out 30 minutes later, battling for footing as they head markedly downhill towards Ashland.

For race starters and officials, their philosophy is similar to that of referees and umpires—"If we go unnoticed, then we've done our job and things went well." Such was not the case in 1987 when at noon, the gun went off with two race officials, a policeman and the restraining rope still in front of the over 5,000 rushing runners. Many fell, including defending race winner Rob de Castella, but fortunately no one was seriously hurt.

Two miles downhill from Hopkinton is Ashland, the original start of the marathon from 1897 until 1924 when the race was increased from 24.5 miles to its current length of 26.2. Here the pack starts to thin out a bit but the hilly nature of the town really doesn't let the runners settle into a steady pace until they reach Framingham, three miles down the road.

In Framingham, racers can finally stretch their legs, cruise for a bit, and enjoy the scenery in a two-mile stretch of flatness. It was here that in 1907, eventual race winner Tommy Longboat and nine others sprinted across a set of train tracks just before a long freight train rumbled through, blocking the course for the rest of the runners for almost two minutes. That won't happen on Monday.

The terrain is downhill and then flat again as runners fly through Natick, passing the scenic Lake Cochituate, where as legend has it, top runner Ellison "Tarzan" Brown took a dip to cool off during a particularly warm race in the 1930's. That also won't be happening on Monday. 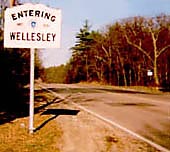 What definitely will happen on Monday and has happened in every race since 1897 is that when the runners reach Wellesley, the half-way point of the marathon, they will hear screams of encouragement at decibel and pitch levels that can only be rivaled by teenagers at a Miley Cyrus concert. The screams will be coming from the women of Wellesley College, who are proud to uphold the tradition at what is now known as "the screech tunnel."

In 1992, the noise was so deafening to race winner Ibrahim Hussein that he went past the college with his hands over his ears and a pained look on his face. Some men play up to the crowd, blowing kisses or even stopping to show off with a pushup or two. The women at Wellesley don't discriminate, but since Roberta Gibb became the first woman to run past them in 1966 (albeit unofficially), the loudest screams seem to be reserved for their own.

One word: ugh. Try running a half mile on a hill with an incline of close to 90 feet. Not fun. Now do it after running up three similar hills just prior to that. Now try running up those four hills, one after the other, after running 20 miles. That is what Newton has to offer.

The last of these hills, "Heartbreak Hill," is easily the most famous. It is not significantly steeper or longer than the previous three, but it is the last. In 1936, John Kelley, who completed Boston 58 times, passed the aforementioned Tarzan Brown at the top of the hill and gave Brown a friendly pat as he went by. Brown responded by bolting down the backside of the hill and flying by Kelley to go on to win the race. Boston Globe writer Jerry Nason then dubbed the hill "Heartbreak Hill."

Though reaching the top of Heartbreak is quite an accomplishment, runners who think the race is over at that point are sadly mistaken. The 230-foot drop from there to the finish line is every bit as important and is often more taxing on the body than the uphill climb. 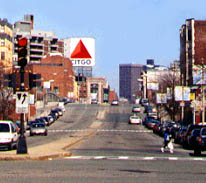 It's all downhill from Newton as the runners flow through the streets of Brookline between thousands of spectators and into Boston's Kenmore Square. Kenmore is home to Fenway Park and the Boston Red Sox, who traditionally play an 11 a.m. home game on Patriot's Day.

As the game ends, 30,000 more fans stream down to the already packed Commonwealth Avenue to cheer on the competitors. There is now just one mile to go and it appears to runners as if they can reach out in front of them and touch the John Hancock Building, which is right near the finish line.

Kenmore is also the starting point for the infamous Rosie Ruiz, who became public enemy No. 1 when she leapt out of the crowd to presumably win the race in 1980. She was later proved to be a fraud.

Through Kenmore and down Boylston Street they go for another 3½ blocks. And there it is, finally. The oasis. The blue and yellow painted line on the street that says "Finish." For hours they continue to filter in, the last ones finishing in darkness after most of the spectators have left, leaving behind 26.2 miles of crushed cups and chewed up orange peels. Their "ChampionChip" records the time as they cross but time doesn't really matter. It's over.

More about the Boston Marathon