The Great Plains is an area of the United States stretching east to west from the Mississippi River to the Rocky Mountains and north to south from Canada to Mexico. Native Americans of the Plains endured hot summers and long cold winters, settling along the rivers, hunting, fishing, and farming to survive. Tribes of the Plains shared some similarities in culture and tradition, but each had distinctive qualities that made them unique. Follow the slideshow to learn about some of the Native American tribes that inhabited the Great Plains during the 19th century.

Comanche Chief Quanah Parker
The Comanche tribe first appeared in New Mexico around 1705 after separating from the Shoshoneans who lived further north. In the late 18th and early 19th century, the Comanche lived in the Great Plains that includes present day Colorado, Kansas, Oklahoma, and Texas. The Comanche were excellent horsemen, often raiding south into Mexico. They were extremely warlike and effectively prevented white settlers from passing safely through their territory for more than a century. The Comanche considered themselves superior to other Plains tribes, and their language served as the trade language for the area.
Fun Fact: The Comanche are said to have killed more whites in proportion to their own numbers than any other Native American group.
Photo source: Library of Congress 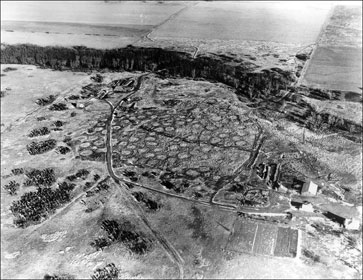 Knife River Indian Villages National Historic Site
The Hidatsa lived in the northern Great Plains and established several agricultural villages on the upper Missouri River in North Dakota. They had a complex social organization and elaborate ceremonies, including the sun dance ritual. Hidatsa villages, with circular earth lodges, were enclosed by a log wall for protection against intruders.
Fun Fact: The Hidatsa regularly engaged in battle; it was a way for young men to establish themselves as tribe leaders.
Photo source: Library of Congress 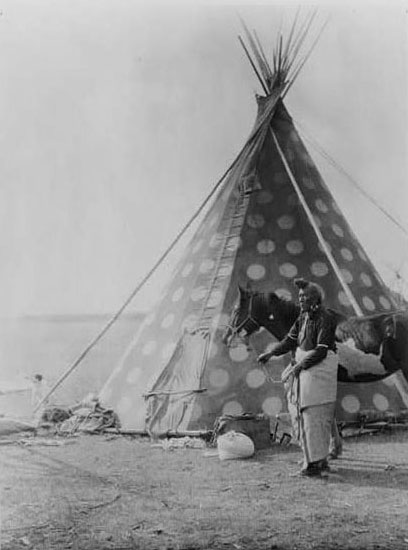 Blackfoot Indian and teepee
The Blackfoot tribes were known for their hostility toward neighboring tribes and white men?repelling intrusions for many years. Blackfoot tribes, who lived in the northern Great Plains area, developed a nomadic Plains culture, living in teepees and relying on the buffalo for sustenance and trade. Unlike other Plains tribes, the Blackfoot did not cultivate many crops other than tobacco, which they grew for ceremonial purposes. When Europeans arrived in the Plains, the Blackfoot tribes nearly starved due to the subsequent killing off of the buffalo and the near exhaustion of fur stocks.
Fun Fact: The name Blackfoot derives from the fact that they dyed their moccasins black.
Photo source: Library of Congress 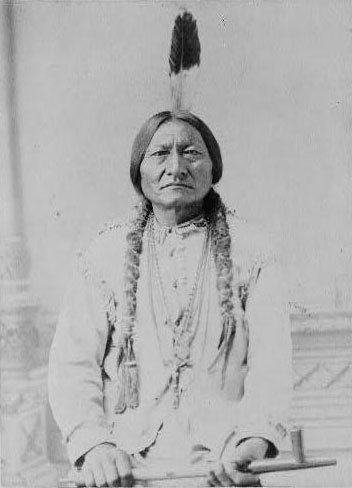 Chief Sitting Bull
The Sioux, who are also called the Dakota, consisted of seven tribes in three major divisions. In the mid-18th century, after successfully driving out the Cheyenne and Kiowa from the Black Hills, the Sioux lived in the northern Great Plains and the western prairies, which currently comprises Wisconsin, Iowa, Minnesota, North Dakota, and South Dakota. The Sioux resisted white settlers, engaging in many battles during the 19th century. Under the leadership of such chiefs as Sitting Bull and Crazy Horse, the Sioux fought the United States to protect their land.
Fun Fact: The Tetons had the largest population of the seven Sioux tribes with about 15,000 people in the mid-18th century?half the population of the entire Sioux people.
Photo source: Library of Congress 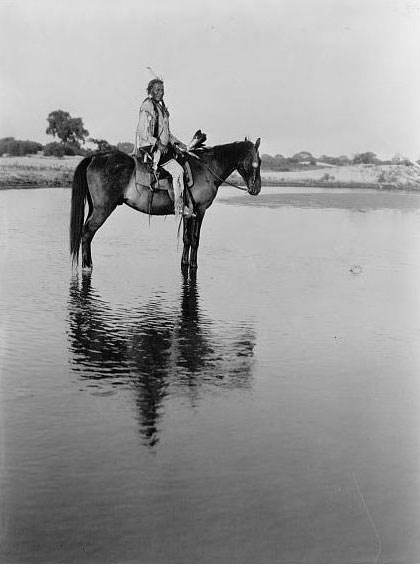 Cheyenne Indian on horseback
Originally inhabitants of what is now Minnesota, the Cheyenne abandoned their settlements in the 17th century, leaving the region to the hostile Sioux and Ojibwa. The tribe split into Southern and Northern Cheyenne tribes in the early 19th century, when a large group decided to settle on the upper Arkansas River. The Cheyenne are known for originating the Ghost Dance and their expertise in sign-talking.
Fun Fact: The Cheyenne and the Sioux joined forces to fight General Custer and his army at the Battle of the Little Bighorn in 1876.
Photo source: Library of Congress 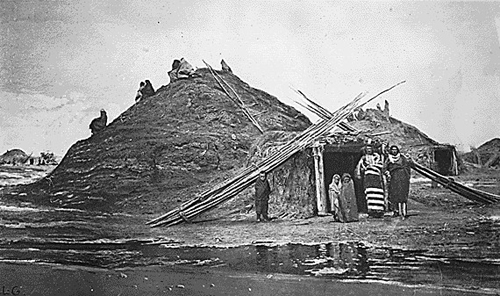 Pawnee Indian home
In some ways the Pawnee were similar to other Native Americans of the Plains, but were most distinguished by their observance of elaborate myths and rituals. They worshiped the god Tirawa (the sun), who they believed conceived Morning Star, the god of vegetation. In one of the few examples of human sacrifice north of Mexico, the Pawnee periodically sacrificed a young woman to Morning Star.
Fun Fact: The Pawnee never warred against the United States, even when treated unjustly by the government.
Photo source: Library of Congress 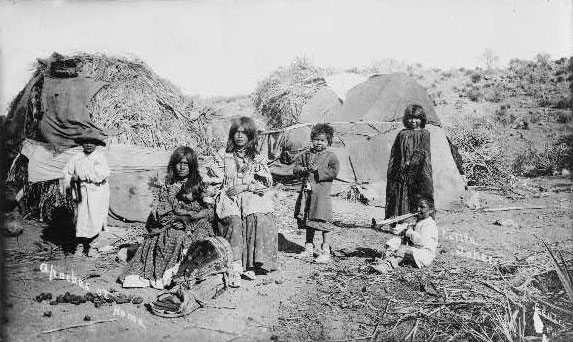 Apache grass-thatched homes
The Apache are best known for their fierce fighting skills and engaging in battles against other tribes and white settlers. They successfully defended their land during Spanish colonization, but the introduction of horses and better weapons by the Spanish led to increased intertribal warfare. By the mid-19th century, Apache lands were in the path of the American westward movement. Many Apache heroes are known for their strong but futile resistance to the United States that lasted through the beginning of the 20th century.
Fun Fact: The Apache usually had matrilocal societies. Men often lived with his wife's family and worked for them.
Photo source: Library of Congress 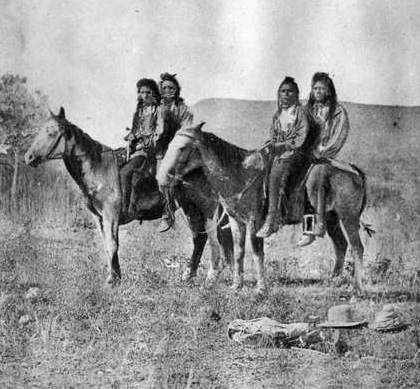 Shoshone hunters
The Shoshone were present in many areas of the Great Plains, including present-day California, Utah, Montana, Wyoming, Idaho, and Nevada. Traditionally the Shoshone were divided into four groups that included the Comanche of west Texas, the Northern Shoshone of Idaho and Utah, the Western Shoshone, and the Wind River Shoshone of Wyoming. The Shoshone are known for living in teepees and hunting buffalo.
Fun Fact: The Shoshone Indians were also called the Snake Nation.
Photo source: Library of Congress 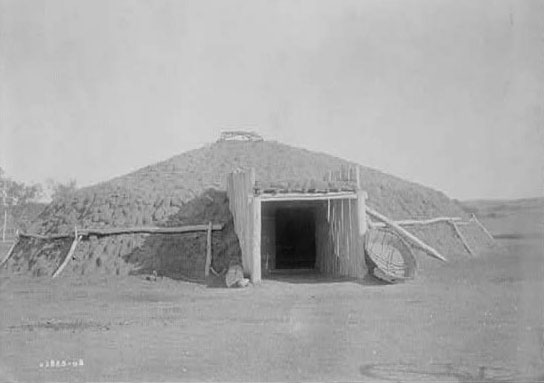 Mandan earth lodge
For the most part, the Mandan were a sedentary tribe that lived near the Missouri River. By the mid-18th century, they lived in nine villages in southern North Dakota. Culturally connected with their neighbors, the Arikara and the Hidatsa, the Mandan often intermarried and traded with the two tribes. The Mandan had certain distinctive cultural traits, including a myth of origin in which their ancestors climbed from beneath the earth on the roots of a grapevine.
Fun Fact: According to folklore, at one time the Mandan lived to the east and moved westward to the Missouri River.
Photo source: Library of Congress 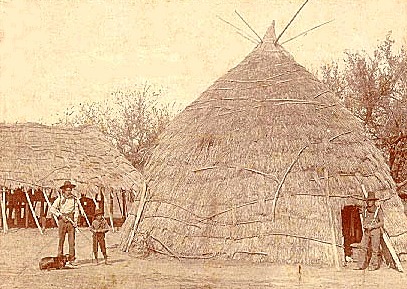 Cone-shape grass house
At one time, the Wichita occupied parts of Kansas, Oklahoma, and Texas. In 1872, they ceded all their land to the United States. Culturally Wichita tribes were similar to the Pawnee, who also lived in the Great Plains. A distinctive structure to the Wichita was their grass houses, built in a cone-shape that resembled a haystack. Also unique to the Wichita people was a dance for agricultural fertility and in the late 19th century they adopted the Ghost Dance.
Fun Fact: The French called the Wichita Panis piques, or Pawnee Picts, because they practiced tattooing.
Photo source: Library of Congress