Easter Around the World

Easter Around the World
From witches to detectives, Easter traditions vary 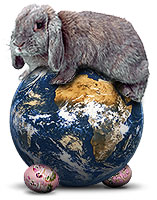 Norway's Criminal Habit Uncovered
In Norway, reading detective novels and crime thrillers has become a popular Easter pastime. Paaskekrim (Easter crime) refers to the new crime novels available at Easter. The period from Holy Thursday through East Monday is a public holiday, and many Norwegians take vacations to the mountains, or to the coast at this time. According to folklore professors at the Institute for Cultural Studies at the University of Oslo, the tradition of reading about crime at Easter may stem from the violent nature of Christ's death.

Latvians Break an Egg
Latvians play an Easter egg game in which each person takes a hard boiled, colored egg. Players make pairs and then tap the ends of their eggs together. First the wide ends of the two eggs are tapped together, then the narrow ends, and finally one wide and one narrow end. When a player's egg breaks, he or she leaves the game, which continues until one player is left with an unbroken egg.

Bermuda Lilies Bloom Abroad
Lilies were a symbol of purity for early Christians. The white trumpet lily, known in the United States as "Easter Lilies," were brought from Bermuda around 1900. The trumpet lily blooms in the spring and rapidly became a popular for Easter decorations.

Mexican Village Produces Mega-Play
The passion play in the town of Iztapalapa, near Mexico City, is one of the most famous Easter events in Mexico, drawing one million visitors each year. Following a devastating cholera epidemic in the winter of 1833, the handful of survivors decided to hold the play to give thanks. The productions have become increasingly more elaborate. Everyone in town participates, but leading roles are awarded to those meeting strict height and appearance requirements, and of undisputed good character.

Easter Witches Haunt Sweden
In Sweden, witches were thought to fly their broomsticks to church bell towers on Easter Eve. Especially in western Sweden, children often dress up as hags and visit neighbors, often with an Easter card, hoping for a coin or a piece of candy in return.
Sources +
Our Common Sources
See also: