How to Care for Ferrets

1: Pick Out Some Furniture

Ferrets' ancestors were den animals, so the home you create should be like a den, too. Use a wire cage that's at least 18 inches long, 18 inches deep, and 30 inches wide. Many ferrets prefer bi-level cages that feature stairs or ramps that ferrets can climb, and shelves or hammocks where ferrets can perch. Avoid aquariums, which provide poor ventilation. Because ferrets are accomplished escape artists, the cage should feature a secure latch and openings no larger than one inch by two inches. Since wire flooring is uncomfortable to a ferret's feet, place linoleum tiles on the floor or line the cage bottom with soft material such as washable carpet. Not all materials will work, however: wood flooring is difficult to disinfect, newspaper will blacken a ferret's feet, and cedar chips hold in bad odors and may even cause respiratory problems. Place the cage away from direct sunlight, in a cool, shaded area where temperatures range between 55 and 70 degrees. Clean bedding with a mild detergent and hot water, then disinfect the cage. 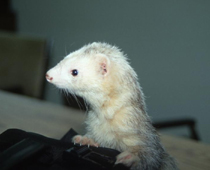 You can save time cleaning a ferret's cage by simply teaching the animal to use a litter pan. Find a small cardboard or plastic tray that's three to five inches high to serve as a litter box, and secure it to one side of the cage, away from sleeping and eating areas. Clumping litter will irritate a ferret's eyes and may cause respiratory problems, so fill the litter tray with one inch or more of pelleted litter products made from paper or plant fibers. Ferrets aren't as fastidious as cats and may not cover their waste regularly, so you will probably need to scoop the litter more often.

Like cats, ferrets enjoy their naps and will often sleep 15 to 20 hours a day. But when awake, ferrets like to be active, so the more you entertain them, the happier—and less mischievous—they'll be. Ferrets love to crawl through almost anything, including PVC piping, cardboard boxes, paper bags, clothes dryer hoses, and even denim blue jeans. Safely secure a toy to the top of the cage, and your guest may be content to bat the object around for a while.

Ferrets aren't known for their refined table manners, but by placing a heavy ceramic dish in the cage and attaching a water bottle to the outside of the cage, you should be able to prevent spills. Because of their high metabolisms, ferrets digest a meal in about three or four hours, meaning they may eat as many as seven to ten small meals a day. Ferrets are carnivores and their good health depends on a diet that contains at least 32 percent protein and 18 percent fat; high-quality dry ferret food or cat food should do the trick. For treats, provide melon, grain cereals low in sugar content (such as Cheerios), chopped broccoli, green bell pepper, or cooked eggs. Avoid dog food, which lacks the proper nutrients, and stay away from food that's sweet or salty, too.

Ferrets are social creatures who enjoy visiting with people, so let them roam frequently in a secure area outside of their cages. Although they have a great sense of smell and acute hearing, ferrets have limited vision, which means you should avoid sudden movements and speak in a gentle voice before approaching. Because ferrets have fragile skeletons, be sure to handle them carefully. Never pick up a ferret by the tail; instead, let the ferret come to you, then lift him from behind using two hands—one to support his chest and one to cradle his hips. You can also grasp the scruff of a ferret's neck and support his bottom with your hands. Remember, too, that ferrets are known to nip. If you point a finger at a ferret or poke him, he may think you're an enemy or a source of food.

Ferrets are prone to ear mites, so every few weeks their ears should be cleaned with a cotton swab soaked in a cleanser purchased at a pet supply store. Like dogs and cats, ferrets are prone to fleas and ticks as well, but a veterinarian should help you meet their needs.