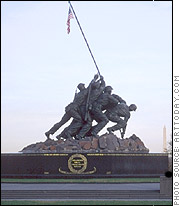 During the winter of 1945, in the midst of World War II, the Pacific island of Iwo Jima, part of Japan, was an attractive target for the Allied command. American B-29 bombers were flying sorties over Japan at the time but were suffering heavy losses on the long-range missions. The bombers were able to travel much greater distances than smaller fighter planes, but without a nearby airfield they were forced to fly without proper fighter escort. Iwo Jima, well within striking distance of Tokyo, was seen as an ideal staging area for expanded bombing runs with fighter cover and a key location for damaged bombers to land in emergency situations.

So the Allies decided to invade.

The 4th and 5th Marine Divisions were sent in on February 19, 1945, and the intense fighting that ensued during the 36-day assault would be immortalized in the words of Admiral Chester W. Nimitz, who said, "Among the Americans who served on Iwo Island, uncommon valor was a common virtue."

The Japanese had constructed a complex series of underground tunnels and bunkers to protect themselves from the heavy shelling that Iwo Jima had seen earlier in the war. When the Americans first hit the beach, not much resistance was encountered. When the Japanese came up from underground, the real fighting began. Later in the conflict other Marine Divisions took part in the action, including the 3rd and 28th.

The most famous image from the Battle of Iwo Jima is undoubtedly the photograph of the flag raising at the summit of Mount Suribachi that was taken by the AP's Joe Rosenthal. The flag-raisers as seen in the photo, are (from left to right) Ira Hayes, Franklin R. Sousley, Michael Strank, John Bradley, Rene A. Gagnon, and Harlon Block.

Strank, Block, and Sousley were killed in the battle that continued on Iwo Jima. The remaining three flag-raisers returned to the U.S. as reluctant heroes.

The picture, which won the 1945 Pulitzer Prize in News Photography among other awards, is perhaps the most reproduced photograph in history. On Nov. 10, 1954, a bronze monument of the famous flag-raising, sculpted by Felix de Weldon and located in Arlington National Cemetery, was dedicated.