How to Care for Hamsters

Hamsters were living in relative obscurity until just 70 years ago, when a zoologist discovered a family of these rodents in the Syrian desert. Today, hamsters' friendly nature and adaptability have placed them among America's most popular small pets. To learn how to fulfill the special needs of these cuddly creatures, follow the suggestions below. 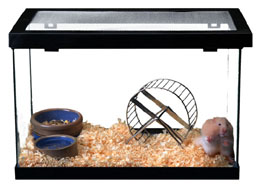 When putting together a hamster's living quarters, consider the animal's natural habitat. In the wild, hamsters live underground, emerging under cover of darkness to search for food. Domestic hamsters still prefer the "night shift," so it's best to house them in a quiet, dimly lit room away from drafts, direct sunlight, and noisy animals. An aquarium that holds at least 10 gallons is usually suitable for hamsters, as long as the top of the tank allows for proper ventilation. A fine-mesh screen will do the trick, but make certain it's fastened securely to keep curious hamsters from attempting an escape. (Avoid the colorful plastic rodent homes sold in pet supply stores, as they are difficult to clean and offer easy escape routes.)

Line the bottom of the tank with plain white paper, and add dry timothy hay or shredded white paper for burrowing and nest-building. Avoid using cedar shavings, which can cause respiratory problems.

Although hamsters enjoy the company of humans, they are less friendly to their own kind. They are solitary creatures who must be kept in separate quarters; in their native habitats, they come together only to mate and will most likely fight if they are forced to share space. Even hamsters housed in quiet rooms still need hiding places within their tanks to feel secure in their surroundings. Empty tissue boxes and round oatmeal containers can perform double duty as both gnawing toys and hiding places. Notorious nibblers, hamsters may harm their internal systems if they ingest soft plastics, but some hamster owners provide PVC piping or hard plastic items that withstand chewing.

Hamsters have high metabolisms and should have constant access to food and water. To avoid spills and maintain a clean drinking supply, attach a water bottle with a metal sipping tube to the side of the aquarium. Some hamsters like to sit in their food dishes, so use a heavy ceramic dish to decrease the likelihood of food spillage. Respect the hamster's need for order by placing the dish a good distance from the bathroom and sleeping areas.

Hamsters enjoy a varied diet that includes commercial grain and seed mixtures tailor-made for the animal as well as certain kinds of fruits and vegetables. A good commercial hamster mix should have all the necessary nutrients. Round out the diet with dandelion greens, chickweed, alfalfa pellets, spinach, lettuce, carrots, apples, and other fruits. A daily menu plan should include rations of a half-ounce of grain mixture, a small handful of greens, and tasty treats such as a slice of apple and a floret of cauliflower. Stay away from raw beans, apple seeds, sprouting potato buds, parsley, and green parts of tomatoes—all foods that can be poisonous to hamsters.

In their native territories, hamsters have to travel great distances to find food, a fact that explains domestic hamsters' need for lots of exercise. Exercise wheels can provide hamsters with a good bit of activity, but they should not be the only source of physical activity. Complement the hamster's home gym and entertainment center with chewables such as a dog biscuit or pesticide-free twigs from beech trees, maples, willows, hazelnut bushes, or fruit trees; these will also help keep the animal's incisors worn down. Cardboard boxes, toilet-paper rolls, and paper-towel rolls are also safe for hamsters to burrow in, chew on, and play with. Wooden ladders and branches fastened securely to the inside of the tank can help hamsters show off their climbing agility.

Hamsters can be cranky if disturbed during their daytime sleeping hours, so try cleaning, feeding, and handling in the late afternoon or evening. Be sure to clean out the hamster's bathroom space every day. Hamsters like to amass treasure chests of tidbits, so check for stockpiles of perishable food. Also clean the water bottle and sipper tube daily to prevent buildup of food, algae, and bacteria; check to be sure it is working properly as well.

Change all the bedding twice a week, disinfecting the tank and letting it dry before laying down fresh bedding and replacing the hamster's chewing, nesting, and climbing toys. If you must remove a hamster to clean her tank, you can hold a small box near her and she will probably run right in. When handling a hamster, always hold her over a surface such as a tabletop in case she manages to wriggle her way out of your hands.