Theories of the Universe: Curved Space

What exactly is space? No one really seems to know. Some philosophers and scientists think that space and time are just states of consciousness that we experience as human beings. The fact that space and time take on very different aspects when we sleep and dream suggests that they only have the qualities that we imbue them with when we're awake. On the other side of the coin is the notion that space itself is “alive” in a certain sense. The shape of space responds to objects in the environment. This is close to the ancient cosmological view of Plato and Pythagoras who thought that space was an organic whole. It could be just one of many dimensions that contain universes within universes. Someday all will be revealed, or maybe not. 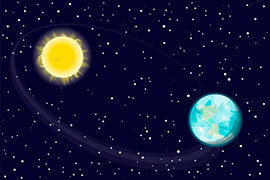 The second aspect of general relativity is based on the exotic notion of space being something that can bend, warp, and ripple. Einstein's theory of general relativity describes the force of gravity as the unseen geometry of space. In other words, gravity is not a force that makes things fall but is rather a property of space. Things fall because that is their normal straight-line path in a curved, four-dimensional space-time continuum. But curved space is really a weird concept to grasp. Is there anything called straight space? A straight line is the shortest distance between two points and usually the shortest distance means line of sight or the path of a light beam. But we assume that light travels in a straight line. If the light-beam curves, is it going straight in curved space? Or is it curving in straight space? On some occasions the shortest distance between two points is the path that takes the longest according to your watch, because time slows as you go faster.

One of the most stunning implications of general relativity was the prediction in space of black holes. A black hole is a compressed star whose gravitational warping of space has turned in on itself. The massiveness, in terms of density of matter in these black holes, is so great that they severely warp space into a dark funnel. There is nothing that comes close to these dark funnels that can escape its gravitational pull, not even light. But it's unknown what happens at the deepest point of the vortex of these black holes.

Well, without confusing you any further, let's do another thought experiment to give you an idea of how and why space curves. Some of the most common ways to think of space is to see it as an elastic medium. Think of a waterbed or a sheet of rubber or a pool of Jell-O. If you place a heavy object like a bowling ball on it, the mass of the ball depresses into the material. Now if you roll another smaller ball, like a marble, out onto your bed sheet or Jell-O, the marble will fall into a curved path made by the depression of the bowling ball and circle around it. If the marble has just the right speed and direction, it will go into orbit around the bowling ball.

If you replace the Jell-O or the bed sheet with space, the bowling ball with the Sun, and the marble with the Earth, you can get an idea of how the Earth orbits around the Sun. If you apply this model to the planets and moons in our solar system you can see how its fundamental structure is laid out. The only other thing you have to realize is this warping of space happens in all directions, not just the two-dimensional surface of our Jell-O pool or rubber bed sheet. Think of the bowling ball as being covered by the Jell-O or rubber sheet and depressing it in every direction.

Here's a list of some of the features that are a result of this aspect of general relativity:

Einstein was able to develop this theory of a mass warping space by combining what he learned from special relativity and the principle of equivalence. Out of this came an answer to the question that Newton had asked. Newton believed that “gravity must be caused by an agent,” although he had no idea as to what that agent was. Part of his alchemical quest “Cosmology in the Age of Enlightenment,” was devoted to trying to find out what this agent was. Einstein revealed that the agent of gravity was the very fabric of space itself.