Millennial Markers
Voices and visions of the next millennium

While seers predict a catastrophic Apocalypse and curmudgeonly Luddites revel in the shutdown of a wired society, a few visionaries see the approaching millennium as a cause for change. Here's a look at some of the more inventive projects that hope to mark the next 1,000 years.

In France, Paul Chemetov had an idea: plant a (somewhat even) line of 1,000 trees marking the north-south Paris meridian, each tree representing one year of the millennium. The "Green Meridian" would grow and become a living monument to the millennium. Chemetov has said, "The Green Meridian constitutes a symbolic way in which to share time."

This major agricultural project will extend 1,200 kilometers (about 745 miles) and will cross eight regions of France to its border with Spain, and, with cooperation from Spain, stretching all the way to Barcelona. On November 15, 1999, school-aged children will push the project into high gear by planting somewhere close to 10,000 young trees. 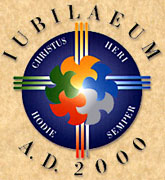 In Vatican City, the world's smallest country, Pope John Paul II has established two official centers for the Catholic church's "Jubilee 2000": Rome and the Holy Land. To commemorate 2,000 years since the birth of Christ, the church has encouraged its members to "shed new light upon the missionary task of the Church in view of the demands of evangelization today."

Throughout the holy year, more than 5,000 religious centers around the world will become "Holy Gates" (designated by the Pope) to welcome Christians into their houses of worship. Within the borders of Vatican City, the Pope has commissioned the cleaning and restoration of the facade of Saint Peter's Basilica and the construction of a new chapel with murals by artist Alexandre Kornoukhov.

A shoebox, this ain't. Though this orbiting earth satellite, named KEO, will have no electronic or energy-powered equipment, it will nonetheless have special, glass-tempered CD-ROMs which will hold messages up to four pages long from citizens in a multitude of various languages.

According to Jean-Marc Philippe, the French artist who originated the idea: "KEO is like an impressionist painting where each individual's message is one small dot of paint that he or she leaves before standing back to contemplate and find meaning in the rich canvas of human colors. It challenges us to probe the question of who we really are and what we want of ourselves".

The satellite will be programmed to circle the globe for 50,000 years before returning to the Earth. Perhaps most interesting may be the satellite's design. It will have wing-shaped metallic alloys which assume different shapes according to various temperatures. According to their web site, organizers say, "When gliding under the sun's rays or entering the Earth's shadow, its wings will take life and begin to beat like those of a large migratory bird."

In Greenwich, England, where the clock is king, organizers are constructing the massive Millennium Dome, touted as the largest exhibition hall ever conceived. Prime Minister Tony Blair has said the Dome is the "most exciting thing to happen anywhere in the world in the year 2000."

This $1.25 billion dome will be filled with concert performances, exhibitions, and scores of celebrants on January 1, 2000. Ultimately, the Millennium Dome will cover 80,000 meters of land, or the equivalent of 3,300 double-decker London buses.

New wonder of the world

Nothing remains of the ancient Pharos lighthouse, one of the Seven Wonders of the Ancient World, but French and Egyptian officials are planning a new monument in its place. Located in the middle of the Mediterranean Sea (about 150 meters from the coast of Alexandria), this new lighthouse will be designed by The National Center of Art and Technology in Reims, France.

Designed in the form of an obelisk, this new lighthouse will measure 145 meters in height, 9 meters at the base, and 6 meters at the top. The entire structure will be covered with glass, and will reflect sunlight over the coast of this ancient city.

Nobel Prize winners, spiritual leaders, and citizens from around the world will converge in Costa Rica to celebrate this week-long summit for peace to be held in June of 2000.

Sponsored by the non-profit organization Milenio, the United Nations' University for Peace, and the government of Costa Rica, the centerpiece of the event will be a forum called "Gran Foro," to discuss the practice of peace and the exchange of various healing practices. In addition, there will be a performing arts festival and the unveiling of a seven-foot "Millennium Bell," created from discarded guns and weapons.