History of the Summer Vacation 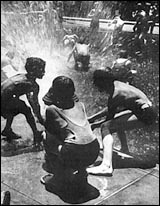 Why does the American school year start in September and end in June? It's something of a mystery. Did children once "bring in the harvest" on the family farm all summer in the distant rural past?

Historians at Old Sturbridge Village, a living history museum that recreates an 1830s New England farming village, say no. According to the web site and schoolmistress there, farm children went to school from December to March and from mid-May to August. Adults and children alike helped with planting and harvesting in the spring and fall.

Working Families: Then and Now

Urban schools in the 1800s also lacked the long summer vacation modern Americans take for granted. Like working families today, new immigrant families needed a safe and affordable place for children to stay while parents worked. In large cities, children of parents who worked in factories, shops, or mills learned English and other subjects during an 11-month school year.

Vacations Around the World

Short school years with long vacations are not the norm in Europe, Asia, or South America either. Children in most industrialized countries go to school more days per year and more hours per day than in America. While just sitting in a classroom longer does not necessarily ensure children will learn more, many American teachers spend weeks every fall just reminding kids of what they forgot over the summer.

A Round of Vacations

Some teachers, principals, parents, and children believe strongly that a three-month summer vacation hurts children, fragments education, and wastes tax money. Since the early 1900s, school districts around the country have offered a longer school year or a school calendar of multiple short terms interspersed with many short vacations. Other parents feel just as strongly that short school years and long summer vacations are essential to growing up.

One popular alternative calendar is the "45-15" type, by which nine-week terms alternate with three-week vacations throughout the year. Kids start school in "waves", rather than all on the same day. In this system, one group is always on vacation during any given week. Schools are less crowded, with fewer students on campus at once, but still serve the same number of children.

What Worked, What Didn't

Successful programs have coordinated the school calendar with the schedules of employers, recreation, and child care providers. The scheduling for "45-15" can be complicated, but some school districts have flourished with multiple short vacations spread throughout the year.

Much less popular historically has been a system that keeps the long vacation, but cycles it through the calendar year. Many parents shivered at the thought of having their children home for three months in the middle of winter. The prospect of frigid vacations effectively froze this option out of most school districts.

Ladies of Leisure and Busy Families

Wealthy ladies of the last century were often sent off, together with their children and servants, to summer homes for months at a time. They were free to take lengthy vacations without worrying about after school programs or days off from work.

Most modern American fathers and mothers work year round and scramble to find fun, safe, affordable programs during summer vacations, winter vacations, spring vacations, snow days, and the seemingly endless parade of holidays that schools take but employers do not.

A Scrap Bag of Time

Often, the schedules of schools, day camps, child care, and after school programs are not coordinated with each other, and don't match the average work day or year either. Parents can end up with a year-round job that ends at 6:00, an after school program that ends at 5:45, and an hour drive between the two. Families can face hours every day and weeks every year with few safe places for their kids to go. Some families would welcome a shorter school vacation. Others would prefer the long vacations available to families in European countries.

The current American system is like a scrap bag of time. Perhaps schools and employers can better match vacations and hours to create a quilt to cover kids and families.