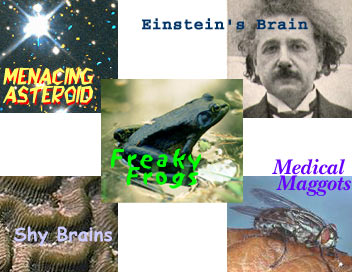 It seems the latest discoveries in our annual roundup are either mutant size-busters or minor portents of disaster. From extra-large bacteria to Earth-bound asteroids, scientists and researchers continue to discover the most amazing things.

According to researchers at Princess of Wales Hospital, Bridgend, Wales, Lucilia sericata, the larvae of the common greenbottle fly, could help to address the problem of antibiotic resistance. Over the past three years, the clinical use of such maggots has been reintroduced into the UK and elsewhere (to well over 400 centers) with considerable success.

Maggots clean wounds by eating only the dead or dying tissue, thus promoting nature's healing process. (Some other fly species do eat healthy flesh.) The mechanism by which the larvae kill bacteria in wounds are not fully understood, but among the explanations offered are the production of natural antibiotic-like agents, the modification of the pH of the wound, or the ingestion and destruction of bacteria as part of the normal feeding process.

Since 1995, alarming sightings of large numbers of frogs born with extra limbs, missing eyes, and other bizarre abnormalities have been reported more and more often, raising public fears that these ecologically sensitive amphibians are bellwethers of some larger environmental catastrophe. Speculation about the causes of the frog abnormalities included pesticides, chemical pollution, or DNA damage to frog embryos as a result of too much ultraviolet radiation passing through the thinning ozone layer.

Now researchers have partially answered this puzzle. In April 1999, two studies released by scientists from Hartwick College and the Stanford Center for Conservation Biology provided strong evidence that some of the weird disfigurements are caused by small parasitic flatworms called Riberoria trematodes. These creatures burrow into the hindquarters of tadpoles where they physically rearrange the limb bud cells and thereby interfere with limb development.

Why are You So Shy?

A University of Iowa study found new evidence that people may be shy or outgoing because of the way their brains are structured.

Researchers at IU used PET scans to study the brain activity of their subjects. The PET scans revealed that introverts have more activity in the frontal lobes of the brain and anterior, or front, thalamus. These areas are activated when a person's brain takes on internal processing such as remembering, problem solving, and planning.

Extroverts exhibit more activity in the anterior cingulate gyrus, temporal lobes, and posterior thalamus. These areas are typically thought to be more involved in sensory processing such as listening, watching, or driving.

Remember the short-lived doomsday asteroid scare of 1997 that turned out to be false? Now there's another one heading our way.

Astronomers are cautiously observing the orbits of a potentially hazardous asteroid discovered in January 1999. Researchers at the Minor Planet Center (MPC) have calculated that near-Earth asteroid 1999 AN 10 will pass within 24,000 miles (39,000 kilometers) of Earth in 2027, with the potential for even closer approaches in 2044 and 2048. But there's no need to panic. Astronomers advise that its chances of colliding with Earth are very small.

The Mother Lobe of Genius

When Albert Einstein died in 1955 at the age of 76, his brain was removed and preserved for scientific study. Recently, Prof. Sandra F. Witelson and her colleagues at McMaster University, Canada, compared anatomical measurements of Einstein's brain with a control group of men and women whose brains were of normal intelligence, and reported their findings in June 1999.

In general, Einstein's brain was similar to other brains except for one area called the inferior parietal region, which was 15% wider than those of the other brains studied. The inferior parietal lobe is important for processing visual and spatial cognition, mathematical thought, and imagery of movement. The unusual development of this lobe may have been a contributing factor to his genius.

Back to the Beginning
?
See also: