Fast Facts on Sharks
How is a shark different from other kinds of fish? 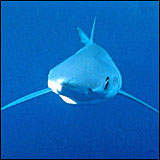 Sharks are fish. But how is a shark different from other kinds of fish?
Shark Hearing
Sharks have extremely sensitive hearing. They can identify much lower sounds than human ears can detect, and some can hear sounds more than 700 feet away. Some scientists think hearing is typically the first sense sharks use in detecting their prey.

Shark Smelling
Smell, however, could be the most remarkable of the sharks' senses. Some sharks may be able to track their prey by smell from up to a mile away, probably by following a trail of microscopic particles of protein or blood.

Shark Babies
Different sharks have their babies, or "pups," in different ways. Some lay egg cases. Others grow the pups inside of them and give birth to live young. Depending on the species, a shark may give birth to one or to dozens of pups! However it is born, a pup is on its own from the start—the mother shark doesn't stay around to take care of it.

Shark Teeth
Most sharks have at least four rows of teeth. They don't chew—they use their powerful teeth to bite and tear their food. As the first row of teeth in a shark gets worn out, the other rows of teeth move forward. New teeth are always forming.

Shark Predators
Sharks rarely pose a danger to humans. But humans do pose a danger to sharks! Fishermen kill an estimated 30 million to 100 million sharks every year. About 75 shark species are in danger of becoming extinct.
Sources +
Our Common Sources
See also: