Even though spacecraft are thoroughly sanitized, scientists have been startled to learn that some 250 species of bacteria and fungi can live and even thrive in outer space. 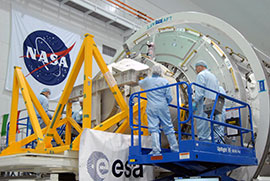 The potential danger of microbes in space was made clear during a recent mission of the Russian space program, Mir. According to space.com, a film kept growing across the window, reducing visibility.

After returning to Earth, officials were disturbed to discover a host of bacteria and fungi covering the porthole. Even worse, the organisms had

corroded the window even though it was made of quartz glass inserted in a titanium frame encased in enamel?previously thought able to withstand almost anything.

To prevent the risk of contamination of outer space with Earth germs, as well as the introduction of foreign organisms to our own planet, space vehicles are exhaustively cleaned.

The craft is usually pumped full of ethylene oxide and methyl chloride, a lethal mixture to microorganisms. A few days before departure, astronauts are often quarantined to reduce exposure to germs. During flight, the crew vacuums the vehicle regularly and wipes all surfaces with disinfectant.

Despite these measures, such life forms thrive. It is believed bacteria escape fumigation by hiding under plastic parts where the gas does not penetrate. Once in flight, they emerge into a sterile atmosphere with few competitors to stop them. By contrast, Earth's environment is so full of microorganisms they usually keep each other in check.

Once in space, germs mutate, partly due to radiation levels 500 times higher than on Earth. They sometimes become disturbingly aggressive, growing rapidly in unexpected places. Solar activity often causes the fungi to grow more actively. They get nourishment from the breath, perspiration, and dead skin of astronauts.

Samples of the mutated microorganisms are kept in sealed containers stored in secure facilities because scientists cannot be sure how they would react on earth. Since some of the bacteria can "eat" metal, they could become a potentially serious weapon, rendering guns or machines useless.

You May Also Be Searching For