From the Spotlight Archive: This feature appeared on January 19, 1999

Amid the usual media frenzy, Denver and Atlanta
prepare to face off in Miami 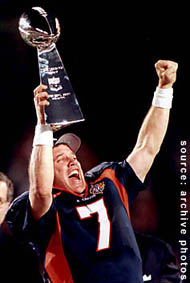 Denver quarterback John Elway triumphantly hoists the Vince Lombardi Trophy after leading the Broncos to a 31-24 upset over the Packers in Super Bowl XXXII.

The hype is here. Just under two weeks from now America's biggest sporting event will take place at Pro Player Stadium in Miami. The Super Bowl is the climactic moment of the season in America's favorite sport — professional football. Two weeks of incessant television, radio and newspaper build-up will lead to a 7-hour pre-game show, about two and half hours of actual play, tons of commercials, an hour-long halftime extravaganza, and a year's worth of post-game dissection.

As they are every year, the Super Bowl parties this year will be biggest in two cities. This year expect tortilla chip and deli-platter sales to spike in Denver and Atlanta at the end of the month. Denver, home of the AFC champion Broncos, is used to this Super Bowl thing. They won the darn thing last year and are set to play in the world's biggest game for the fifth time since 1987, and the sixth time in their history. Atlanta is used to seeing their Braves in the World Series—and they did host a little event called the Summer Olympics a few years back— but their beloved and historically inept Falcons are making their Super Bowl debut on January 31.