This feature was written in the summer of 2004.

Book a trip to Africa, and pray for clear skies. That’s one possible reaction to the upcoming transit of Venus, which is going to be missed by residents of much of the United States. This rare phenomenon last took place in 1882, so long ago that nobody currently living has seen it.

What is the transit of Venus? 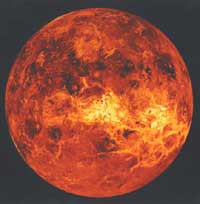 It might be helpful to start by considering the more familiar phenomenon of a solar eclipse. This occurs when the Moon’s orbit causes it to come between the Earth and the Sun during the daytime, which blocks part or all of the Sun from people’s view. Another word for this sort of event, in which a small astronomical object blocks the view of a larger one, is a "transit"; thus, a solar eclipse could be called a "transit of the Moon."

Similarly, a transit of Venus takes place when Venus comes between the Earth and the Sun, blocking a very small part of it, with the effect being that of a small black dot moving across the Sun. While Venus passes between the Earth and the Sun roughly once every nineteen months, the two planets’ orbits are on slightly different angles. The result is that, to a viewer on Earth, Venus usually seems to pass above or below the Sun.

Transits of Venus come in pairs. The last two took place in 1874 and 1882; the next two will be in 2004 and 2012, followed by another two in 2117 and 2125. It’s unlikely that anybody reading this will still be around to see the 2117 transit, unless medical science gets much, much better in the near future, so this might best be described as a twice-in-a-lifetime chance.

Historically, the primary importance of the transit of Venus has been that it enabled scientists to figure out how far the Earth is from the Sun. This distance, known as the astronomical unit, is vitally important to the study of astronomy, enabling scientists to extrapolate the scale of the solar system, and, later, the universe. People traveled great distances to see the transit; most notably, this was the primary objective of Captain James Cook’s 1768-1771 expedition, in which he observed the transit in Tahiti.

Where the transit of Venus will be visible

The transit of Venus will take a bit over six hours on June 8th, from the moment the edge of Venus touches the edge of the Sun to the moment when Venus leaves the Sun on the other side and vanishes from sight. In many locations on the Eastern Hemisphere, this will take place between sunrise and sunset, so people there will be able to see the entire transit, if clouds don’t get in the way. In most of the United States, we’re less lucky. Those in the eastern part of the U.S. will be able to see the end of the transit at sunrise; those in the western part will not be able to see it at all. The exception is Alaska, where some or all of the transit will be visible, depending upon how far north one is.

More complete information on where and when the transit will be visible around the world is available from NASA.

What not to do

Looking directly at the Sun, even for a very short period of time, can burn out your retinas and cause permanent blindness. Even if the Sun looks dim using any of the above methods, infrared radiation can still get through, with the effects of the eye damage becoming known only hours later. The transit of Venus might be a fascinating sight, but you don’t really want it to be the last thing you see. Do not look at the Sun.

Fortunately, there are some ways to safely view the transit.

One good method is to construct a projector, in which an image of the Sun is projected onto a surface that can be viewed. Here are instructions for making a simple projector using a cardboard box and some aluminum foil. You can also make a better projector using a pair of binoculars, a tripod, cardboard, and duct tape.

There are also a couple of filters through which one can look directly at the transit, most notably number 14 welder’s glass, which can be bought at a welding supply store. (Anything less than number 14 is not safe for use.) Telescope filters are also available, but are best avoided unless you’re experienced; many cheap filters have a tendency of heating up and cracking, which can be very dangerous. In particular, do not use filters that screw onto the eyepiece of a telescope. Finally, there are manufacturers who sell special eclipse filters, although you’ll want to be really sure they don’t get scratched. The Exploratorium provides more information on filters.

Finally, no matter where you live, you can watch the entire transit as it happens on the Web, courtesy of NASA and the Exploratorium, broadcast from an observatory in Athens, Greece. No filters or projectors required.

Be safe, have fun, and enjoy this rare and fascinating event.