No city in the U.S. is richer in historical associations than Boston, and no city has retained more of its original buildings as memorials to America's past. Yet modern architecture and industry have flourished alongside the historical in Boston, the capital of Massachusetts. Follow this slideshow to learn more about some of Boston's most notable landmarks. 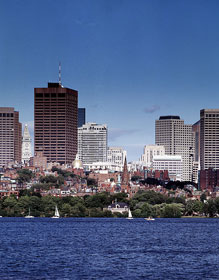 Fun Fact: Boston is known as "the Walking City" because it has the highest percentage of pedestrian commuters. 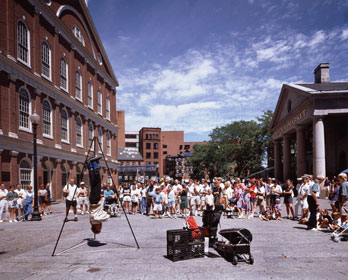 Image by Carol M. Highsmith
Referred to as the "Cradle of Liberty," Faneuil Hall has been a meeting hall and marketplace for more than 250 years. Built in 1741 by Peter Faneuil, the hall has hosted famous orations by Samuel Adams and meetings of the Sons of Liberty.
Fun Fact: The thriving Faneuil Hall Marketplace, an eating and shopping center that is part of the original Faneuil Hall, was ranked America's fourth-most-visited tourist site in 2007 by Forbes Traveler. 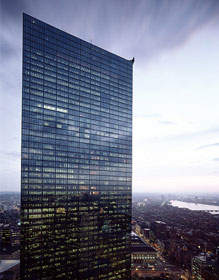 Image by Carol M. Highsmith
This mirrored marvel is Boston's tallest building. During construction, glass windowpanes began to fall off the building, sending 500 pounds of glass plummeting to the pavement below. Completed in 1976 after all 10,344 windows were replaced, the 60-story skyscraper has been considered safe ever since.
Fun Fact: The total amount of glass on the John Hancock Tower covers 13 acres. 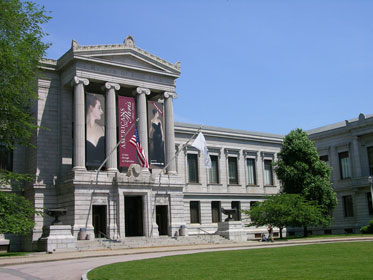 Image by Alex Feldstein
Home to over 345,000 pieces of art, the Museum of Fine Arts in Boston boasts a wide variety of artwork, including large collections of Egyptian artifacts and Japanese pottery. The museum attracts more than one million visitors a year and remains one of America's largest museums.
Fun Fact: The Museum of Fine Arts opened a sister museum in Nagoya, Japan, in 1999. 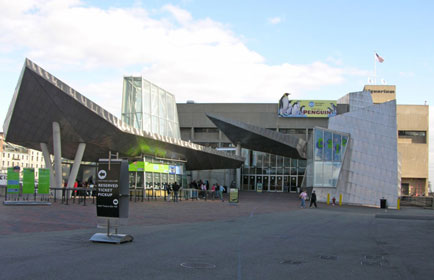 Image by Max Lieberman
At the time of its construction in 1969, the New England Aquarium had the largest circular saltwater tank in the world. Aside from housing hundreds of different species of fish, mammals, and reptiles and hosting more than 1.4 million visitors each year, the aquarium features New England's largest screen, the Simons IMAX Theatre.
Fun Fact: It takes divers nearly 500 hours a month to feed all the creatures in the saltwater tank. 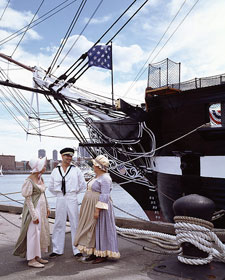 Image by Carol M. Highsmith
Commonly known as "Old Ironsides" because of its ability to repel cannonballs, the heavy frigate is the oldest fully commissioned U.S. Navy vessel afloat. One of the most recognizable vessels in the Navy's fleet, the frigate served in the Quasi-War, Tripolitan War, and the War of 1812. The ship was nearly scrapped in 1830, but a public campaign saved it from destruction, and it continues to be visited by millions each year.
Fun Fact: The USS Constitution was never defeated in battle. 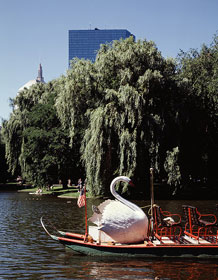 Image by Carol M. Highsmith
Adjacent to Boston Common, the Public Garden was established in 1837 by Horace Gray as the nation's first public botanical garden. The park is famous for its foot-pedal-powered Swan Boats, which travel in a four acre pond. The children's book Make Way for Ducklings, by Robert McCloskey, is set in the Public Garden. Bronze statues of Mrs. Mallard and her eight ducklings are set in cobblestones near an entrance to the park.
Fun Fact: The ducklings are named Jack, Kack, Lack, Mack, Nack, Ouack, Pack, and Quack. 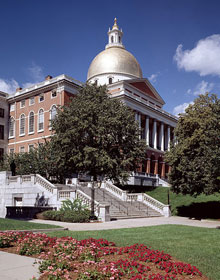 Image by Carol M. Highsmith
The new State House has stood on Beacon Hill, across the street from Boston Common, since 1798. The iconic dome of the State House was first gilded in 23 karat gold in 1874. The offices of the governor and the Massachusetts General Court are housed within the State House.
Fun Fact: The gilded dome is topped with a large pinecone. 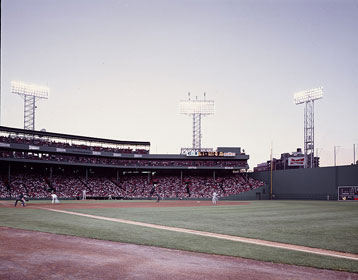 Image by Carol M. Highsmith
Fenway Park is home to the Boston Red Sox and is the oldest of all Major League stadiums. Opened on April 20, 1912, the park was named after the Fenway district in which it's located. Fenway is known for its small seating capacity and the Green Monster, the legendary left-field wall.
Fun Fact: No player has ever hit a home run over the right-field roof of Fenway Park. 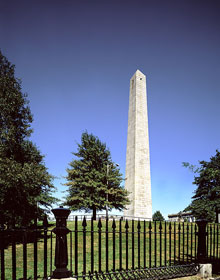 Image by Carol M. Highsmith
The Bunker Hill monument stands at 221 feet tall and commemorates the Battle of Bunker Hill, the first major battle of the American Revolution. The monument was built from 1827 to 1843 on the summit of Breed's Hill, the actual site of the Battle of Bunker Hill.
Fun Fact: The ten acres of land that surround the battlefield were sold between 1838 and 1843 to finance the completion of the monument.