New Evaluations Are Raising the Stakes for Teachers 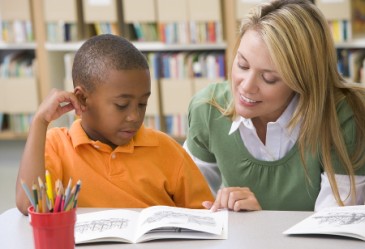 Teacher working with a student

Encouraged by President Obama's Race to the Top grant competition, 20 states and thousands of school districts are changing the way they evaluate teachers. Introduced in the summer of 2009, Race to the Top is a $4.35 billion dollar competition that awards points to states based on how well teachers and principals comply with nationwide standards. Race to the Top also promotes charter schools and computer-delivered assessments. This new way of grading teachers has sparked debate. Critics argue that the federal government should not try to influence local schools, that charter schools weaken public ones, and that too much emphasis is put on standardized test scores.

The Impact of New Evaluations

In 2011, a new teacher evaluation system piloted in 20 New York City schools found that out of 500 teachers almost 18 percent of them were ineffective. Seven percent were rated highly effective and 75 percent fell in the middle. In the current evaluation system used throughout New York City, only two percent were found ineffective. Unlike any previous evaluations, the new system judged teachers in part on their student's performance. The new evaluation results suggested that many teachers aren't doing their job, a fact that many education reformers have suspected.

The Education Action Group Foundation, a non-profit organization promoting sensible education reform, believes that one of reasons for the high percentage of ineffective teachers is tenure. Teachers usually receive tenure in their fourth year of teaching. Once teachers do achieve tenure, getting rid of them is time-consuming and costly. Teacher unions argue that tenure does not keep ineffective teachers in the classroom. The unions go further, saying that only a few teachers are in fact ineffective. Time will tell. The new teacher evaluation system must be used in every New York City school by 2014.

Teachers are worried about job security in the face of the new evaluations. They have good reason. For example, in 2010, 165 teachers in Washington, DC were fired based on Race to the Top's evaluation system, which is called Impact. It is expected that another 200 to 600 educators in DC will be let go in 2011. By November 2011, 387,000 educators are unemployed in the United States. Educators complain that the system doesn't consider variables, like socioeconomic factors and how some teachers face more obstacles than others. Educators argue that there should be a system that helps struggling teachers working in extreme circumstances.

Other states have struggled to put a new evaluation system in place. New evaluations in South Dakota were put on hold in August 2011 after the state's Department of Education ruled that the new standards failed to provide sufficient information. Legislators said that education officials were unprepared and unable to answer questions. Since the new evaluation system will affect every teacher in the state, legislators wanted much more information before giving their approval.

The National Education Association (N.E.A.) hopes to bridge the gap in the debate over new evaluations. In July 2011, the N.E.A. shifted its position on teacher evaluations. While the N.E.A. still challenged the Obama administration's promotion of charter schools and high-stakes standardized testing, members voted to give Obama an early endorsement for his 2012 presidential run. In doing so, the union hopes to embrace and execute evaluation changes on its own terms by both defending union interests and promoting reform. It was a positive sign that the nation's largest teachers' union, with 3.2 million members, sees the need for change and instead of fighting it, wants to help define it.