By Robert I. Tilling

Volcanoes and volcanism are not restricted to the planet Earth. Manned and unmanned planetary explorations, beginning in the late 1960s, have furnished graphic evidence of past volcanism and its products on the Moon, Mars, Venus and other planetary bodies. 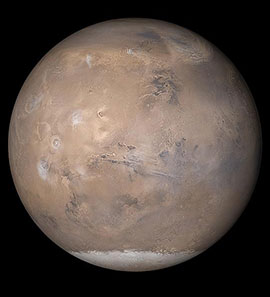 Many pounds of volcanic rocks were collected by astronauts during the various Apollo lunar landing missions. Only a small fraction of these samples have been subjected to exhaustive study by scientists. The bulk of the material is stored under controlled-environment conditions at NASA's Lunar Receiving Laboratory in Houston, Tex., for future study by scientists.

From the 1976-1979 Viking mission, scientists have been able to study the volcanoes on Mars, and their studies are very revealing when compared with those of volcanoes on Earth. For example, Martian and Hawaiian volcanoes closely resemble each other in form. Both are shield volcanoes, have gently sloping flanks, large multiple collapse pits at their centers, and appear to be built of fluid lavas that have left numerous flow features on their flanks. The most obvious difference between the two is size. The Martian shields are enormous. They can grow to over 17 miles in height and more than 350 miles across, in contrast to a maximum height of about 6 miles and width of 74 miles for the Hawaiian shields.

Voyager-2 spacecraft images taken of lo, a moon of Jupiter, captured volcanoes in the actual process of eruption. The volcanic plumes shown on the image rise some 60 to 100 miles above the surface of the moon. Thus, active volcanism is taking place, at present, on at least one planetary body in addition to our Earth.