Since 1947, The National Turkey Federation (NTF) and The Poultry and Egg National Board (PENB) have donated a turkey to the White House each Thanksgiving—a tradition that is often confused with the Thanksgiving presidential turkey pardon. Officially, the presidential turkey pardon began during George H.W. Bush's first Thanksgiving in the White House in 1989. Prior to that event, presidents were more likely to eat the donated birds rather than space them. Follow this slideshow for pictures and information about the presidents and the fate of their Thanksgiving turkeys. 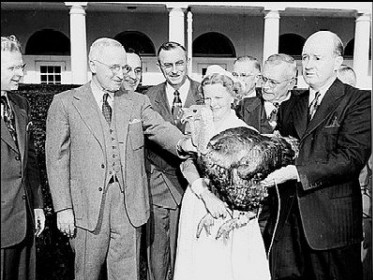 President Harry Truman was in office when the NTF and PENB began donating turkeys to the White House in 1947. Recent presidents have said that the tradition of pardoning a turkey began with Truman, but archivists of the Harry S. Truman Presidential Library and Museum have "found no documents, speeches, newspaper clippings, photographs, or other contemporary records in our holdings which refer to Truman pardoning a turkey." This photograph shows a turkey given to Truman by the NTF before it ended up on the dinner table.
Turkey fact: The average lifespan of domesticated turkeys is 18–24 months. Wild turkeys typically live 3 to 4 years.
Photo: whitehouse.gov 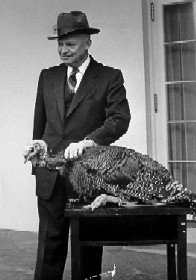 Documents from President Dwight Eisenhower's first term in office indicate that the live turkey he received was then killed, dressed, and frozen. This photograph is from Eisenhower's first Thanksgiving as president, in 1953. During his second term, the turkey tradition changed; the turkey presented to the president was not the same bird that was later eaten in the White House. "In 1960, the files clearly show that a live bird was brought in for a photo op and a separate 'dressed turkey' was left at the White House for the President," according to presidential archives.
Turkey fact: Turkeys are approximately 22 weeks old when they participate in the White House ceremony. There are always two turkeys: one for the ceremony and one as its runner-up.
Photo: gmu.edu 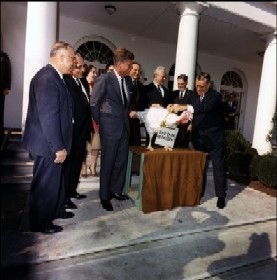 When President John F. Kennedy was presented with a bird wearing a sign that read "Good Eatin' Mr. President" he responded with "Let's just keep him." This photograph was taken three days before President Kennedy was assassinated on 22 November 1963 in Dallas, Texas.
Turkey fact: Wild turkeys can fly short distances at speeds up to 55 miles per hour. Most domesticated turkeys cannot fly since they typically weigh more than twice the weight of wild turkeys.
Photo: whitehouse.gov 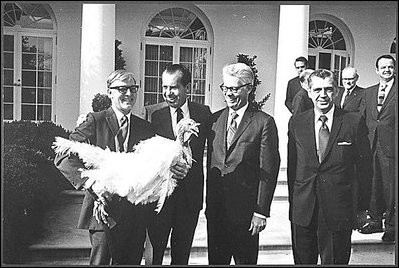 President Richard Nixon did a photo shoot every year with the donated turkey, but there is no record that any of the birds were spared. Nixon does have the distinction of being the first vice president to accept the donated turkey on the president's behalf, which he did in 1955 for President Dwight D. Eisenhower.
Turkey fact: Domesticated turkeys are bred and raised to become fat fast. This often causes joint problems for older turkeys whose bones have trouble supporting the weight.
Photo: whitehouse.gov 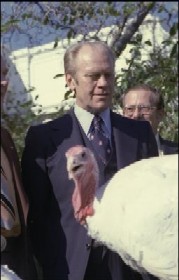 Ford never pardoned any turkeys, but he did pardon his predecessor—Richard Nixon. This photograph seems to show President Ford looking hungrily at the turkey in 1975.
Turkey fact: The flap of skin over a turkey's beak is called a snood. Snoods on domestic turkeys remain red, but the snoods of wild turkeys change color from red to blue depending on the bird's mood.
Photo: whitehouse.gov 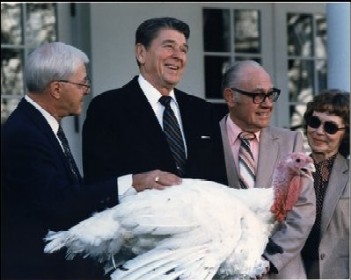 Turkeys chosen for the White House are usually fairly docile, but that wasn't the case in 1984. During the ceremonial speech, the turkey got right in President Reagan's face and flapped its wings, showing intense displeasure at the whole affair.
Turkey fact: Wild turkeys are the biggest game birds in North America. They can stand almost four feet tall and can run about 25 miles per hour.
Photo: whitehouse.gov 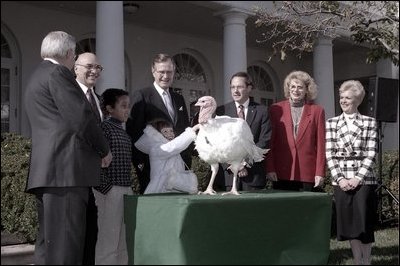 The turkey "will not end up on anyone's dinner table, not this guy. He's granted a presidential pardon as of right now," said George H.W. Bush whose announcement in 1989 inaugurated the first official Thanksgiving presidential turkey pardon. In 1990, the practice of sending the "pardoned" bird to Frying Pan Park in Fairfax County, Virginia began.
Turkey fact: The domesticated turkeys that are brought to Washington, D.C. for the ceremony spend the night before the pardon in the Hotel Washington, where they feast on a scrumptious meal of corn and soybean.
Photo: whtehouse.gov 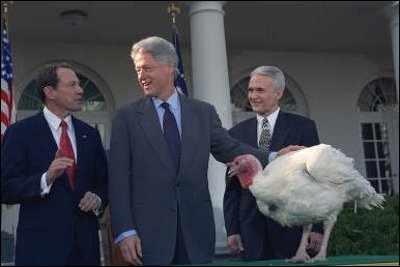 In 1999, the turkey President Clinton "pardoned" was named Harry, after former president Harry S. Truman. During his speech, Clinton said, "So before I feast on one of the 45 million turkeys who will make the ultimate sacrifice, let me give this one a permanent reprieve, and tell you all that he will soon be on his way to the wonderful petting zoo at Fairfax County, Virginia, where he can enjoy his golden years."
Turkey Fact: During his two terms as president, Clinton met eight turkeys and came to believe that each one had a distinct personality.
Photo: whitehouse.gov 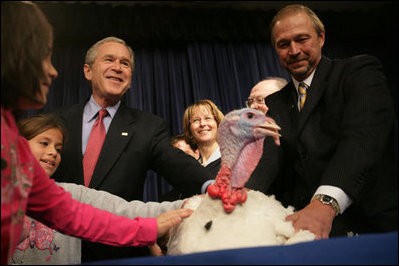 Several notable events concerning the "pardoning" of turkeys occurred while George W. Bush was president. It was during his administration that the first hen, or female turkey, was given a reprieve in 2002. The hen was named "Katie." In 2005 and 2006, the tradition of sending the turkeys to Frying Pan Park also changed; those years the turkey was flown to Disneyland where the bird was named Grand Marshall of the Thanksgiving Day Parade before taking up residence at the resort's permanent live-animal collection. In 2007, the turkey went to Disney World.
Turkey Fact: Female turkeys are called hens, males are called toms, and babies are called poults.
Photo: whitehouse.gov