WHERE DOES SPACE BEGIN?
WHERE IS EARTH IN SPACE?
HOW MUCH SPACE IS THERE?
WHAT IS A LIGHT-YEAR?
WHAT CAN WE SEE WHEN WE LOOK INTO SPACE?
JOURNEY INTO SPACE
FIND OUT MORE

When you look up at the night sky, the blackness you see is space. It is the great void, or emptiness, in which Earth, the Moon, the Sun, and the stars travel. Space is totally silent, and most of it is incredibly cold—around 454°F below zero (–270°C). It is also called outer space.

WHERE DOES SPACE BEGIN? 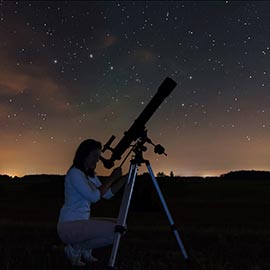 From Earth, space begins at the outer edge of our planet’s atmosphere. There is no clear line between the atmosphere and space—the atmosphere gradually fades away until it merges into space about 300 miles (500 km) above Earth. However, there are tiny traces of atmosphere even farther out than this.

WHERE IS EARTH IN SPACE?

Earth is a tiny speck of matter in space. It is one of nine planets that circle around the Sun. In turn, the Sun is one of several hundred billion stars, which together form a great star “island” in space called the Milky Way Galaxy. There are billions of galaxies in space. Together, all the galaxies and the enormous voids between them make up the Universe.

HOW MUCH SPACE IS THERE?

Astronomers believe that space is infinite—it has no edge or boundary. Earth’s nearest neighbor in space, the Moon, is 238,900 miles (384,400 km) away on average. The Sun is 90 million miles (150 million km) away. Most other stars in the Milky Way are between a million and a billion times more distant than the Sun. Other galaxies are millions of times farther still.

WHAT IS A LIGHT-YEAR?

A light-year is a unit for measuring distances in space. It is the distance that light travels in a year—about 5.9 trillion miles (9.5 trillion km). Proxima Centauri is the closest star to the Sun. It lies about 4.2 light-years away from Earth, which means that its light takes 4.2 years to reach us.

WHAT CAN WE SEE WHEN WE LOOK INTO SPACE?

Without a telescope, we can see about 2,500 stars on a really dark night. We often see the Moon, and sometimes the planets Mercury, Venus, Mars, Jupiter, and Saturn, as well as comets. The farthest thing we can see with just our eyes is the Andromeda Galaxy.