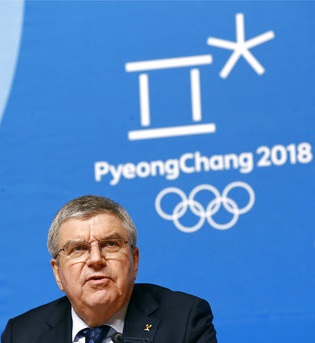 Four years ago, the International Olympic Committee (IOC) added twelve new events to the Olympic Games as an attempt to enhance the "cool factor." Continuing its hope to attract younger audiences, the IOC has decided to add four new events to the 2018 Winter Olympic Games inPyeongchang, South Korea. TVand media interest, as well as gender equality, also played a role in the IOC's decision to add these new events.

The new events areBig Air in snowboarding, mass start in speedskating, mixed doubles in curling, and a team skiing event.There will be 100 events total, with 2,900 athletes competing.

According to the Olympic Program Commission, a sport or discipline must meet the following criteria in order to be added to the Olympics program:

Big Air will replace thesnowboard parallel slalom event in the 2018 Winter Olympics. The goal is for snowboarders to perform as many jumps as possible during the allotted time, completingflips and spins as they fly off the ramps.

Mass start is a fun twist on the normal long-track speed skating. In this event, there are four intermediate sprints that occur during the sixteen laps, one of which isat the end. The first three finishers for each sprint are awardedpoints. In the end, the topthree finishers win a spot on the podium, and the rest of the rankings are determined by the points allotted throughout the race.

Normally divided into men and women, curling teams have four players. Mixed Doubles will switch up the game, creating teams of two: one man and one woman. Because teams are only two people each, the number of stones will be six, rather than the normal eight.

Teams, comprising two men and two women, will compete in parallel slalom races. Each race will have a single participant from each team, and the winner of each race scores a point for their team. A match is best of four, or best times in the case of a tie.

More about the 2018 Winter Olympics