The Hiroshima and Nagasaki Bombings Remembered

The Bombings of Hiroshima and Nagasaki
August 6 and 9, 1945

At 2:45 in the morning of August 6, 1945, an American B-29 bomber flew north from Tinian Island in the Marianas toward Japan. Three and a half hours later, over the city of Hiroshima, the Enola Gay dropped an 8,900-pound atomic weapon from its specially modified bomb bay. Two thousand feet above the ground, the bomb, dubbed "Little Boy" by its makers, detonated, leveling almost 90% of the city.

On August 9, another B-29, Bockscar, set out for the Kokura Arsenal on the southwest Japanese island of Kyushu. Foul weather, however, persuaded the pilot to proceed instead toward Nagasaki, the home of a Mitsubishi torpedo factory. Over this secondary target Bockscar dropped a larger device, code-named "Fat Man." Local geography spared Nagasaki from the near total devastation suffered by Hiroshima; only one third of the city was destroyed.

Fat Man and Little Boy, both weapons of unparalleled destructive power, were actually quite different. Little Boy, fueled by highly enriched uranium-235, was triggered by a simple "gun" mechanism; a small, slug-shaped piece of uranium was fired down a barrel into a larger, cup-shaped piece. This elementary design generated a destructive force of about 15 kilotons—the equivalent of 15,000 tons of TNT.

A much more complex implosion-type device triggered Fat Man. It consisted of a plutonium core surrounded by high explosives wired to explode simultaneously. The shock waves from these conventional explosions triggered the fission of the plutonium, which yielded a 22 kiloton explosion.

The attacks on Hiroshima and Nagasaki had a devastating psychological impact on the already weakened Japanese. Emperor Hirohito accepted the U.S.' terms of surrender on August 14. On September 2, Japan signed an official declaration of surrender aboard the U.S.S. Missouri. 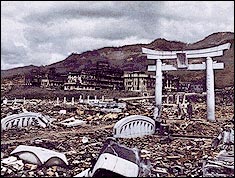 U.S. military officials believed that such a massive demonstration of U.S. military power was the only reasonable way to force an unconditional Japanese surrender. Though the islands' supply lines had been cut, the Japanese air force was a shambles, and Tokyo was nearly in ruins, it was still widely believed that no conventional military action short of an invasion could make Japan surrender. In her entire history, Japan had never been invaded or defeated. Even after the destruction of Hiroshima, she refused to capitulate.

The decision to bomb Hiroshima and Nagasaki—the first and last use of atomic weapons in combat—remains one of the most controversial in military history. Altogether, the two bombings killed an estimated 110,000 Japanese citizens and injured another 130,000. By 1950, another 230,000 Japanese had died from injuries or radiation. Though the two cities were nominally military targets, the overwhelming majority of the casualties were civilian.

Because of robust Japanese defenses and the topography of the islands themselves, an amphibious assault would have taken a heavy toll on U.S. forces. Military officials estimated that such an invasion might have incurred up to a million U.S. casualties, with corresponding Japanese military and civilian losses. Two fire bombing raids on Tokyo earlier in 1945 had already killed 140,000 citizens and injured a million more. The bombings of Hiroshima and Nagasaki, then, might actually have spared hundreds of thousands of Japanese and American lives.
This justification, however, is not universally accepted. Some sources' estimates of U.S. casualties are significantly lower—perhaps as low as 50,000 men. It is also not entirely clear that an unconditional Japanese surrender was impossible, especially if Russia had entered the war before the bombing (Russia officially declared war on Japan on August 8, two days after the destruction of Hiroshima).

Some suggest that Truman, fearing a Soviet attempt to dominate the postwar Asian order as it had the Eastern European, ordered the bombing to force Japan's surrender before Russia had the chance to enter the fray (and thus earn the right to affect the peace settlement). Truman may also have wanted to intimidate his potential rival Stalin with the United States' new destructive capability.

Whether the bombings of Hiroshima and Nagasaki constituted a needless tragedy or a prudent military decision will never be certain. Those who made the decision, as well as most of the survivors, are long gone. The effects, though—the lingering scourge of radiation, the memory of the ghastly civilian casualties, the psychological impact of simply knowing that such a destructive force exists—remain. One can only hope that those who now wield the tools of armageddon will remember the lessons of Hiroshima and Nagasaki for a long time to come.
Sources +
Our Common Sources
See also: