Moons of the Solar System

There are more than 140 known moons throughout our solar system. Most are barren rock, while some have atmospheres, volcanoes, and maybe even oceans of liquid water or methane. Follow this slideshow to learn more about the moons of our solar system. 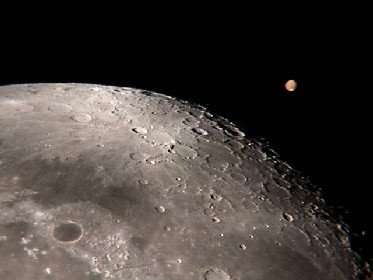 The moon around Earth is known simply as "the Moon," but it is also named Luna, after the Roman moon goddess. Luna is one of the largest moons in the solar system; it does not have an atmosphere and its surface is rocky. The people of Earth are used to Luna shining down on them. Luna does not create its own light however; it simply reflects the light from the Sun. Notice the red spot in the upper right of the picture, that's Mars in the distance.
Fun Fact: If you lived on the Moon, you would see the Earth go through phases, much like Earthlings see the Moon do.
Photo source: NASA 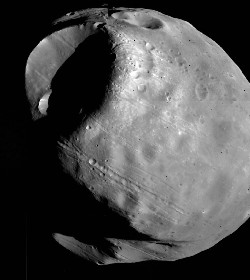 Orbiting Mars are two moons, Phobos and Deimos. This is a picture of the largest of the two moons, Phobos, which comes from the Greek word for fear. Phobos is only 17 miles across, and its orbit around Mars is only 8 hours long, zipping across the sky from the western horizon to the eastern horizon.
Fun Fact: Phobos is doomed. In 100 million years Phobos will either crash into Mars or break up as it's dragged down by the planet's gravity. The current distance between Phobos and the surface of Mars is about 3,600 miles, compared to 250,000 miles between the surface of the Earth and its Moon.
Photo source: NASA 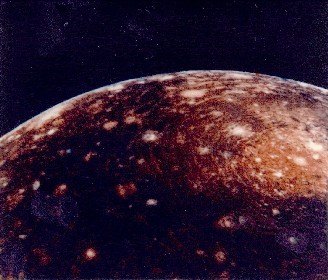 Orbiting Jupiter is the moon Callisto. This moon is about the same size as the planet Mercury, but similarities between the two end there. Oxygen has been detected near the surface of Callisto, and like its neighboring moon, Europa, it may have liquid beneath its icy cratered surface.
Fun Fact: Callisto has had the most impact craters in the solar system, which have left many large cracks in its surface.
Photo source: NASA 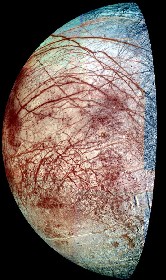 Unlike Callisto, Jupiter's moon Europa has very few craters, which adds to the evidence that the moon is geologically active and possibly has a liquid ocean not far beneath its icy surface. Imagine breaking ice cubes out of an ice tray. Any liquid water in the tray will try to fill in the cracks as it seeps out. The surface of Europa is very similar. If a crack forms in the ice, or a meteor punches a hole in it, the liquid underneath will quickly fill in the gap. This is why Europa has an almost uniform surface, marked by very few craters.
Fun Fact: Where there is water, there could be life. If life does exist on Europa, it is probably supported by undersea volcanic vents much like the ones that help life exist at extreme ocean depths of Earth.
Photo source: NASA 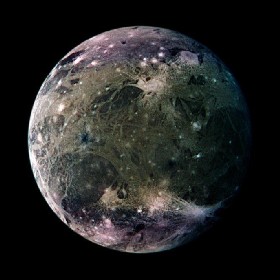 Ganymede is not only the largest of Jupiter's moons, but it is also the biggest moon in the solar system?about three quarters the size of Mars. The bright spots in the picture are of young impact craters from a recent meteor bombardment. Ice covers one-third of Ganymede's surface.
Fun Fact: Ganymede can be seen from the surface of the Earth with the naked eye, as long as you look for it on a clear night without any light pollution.
Photo source: NASA 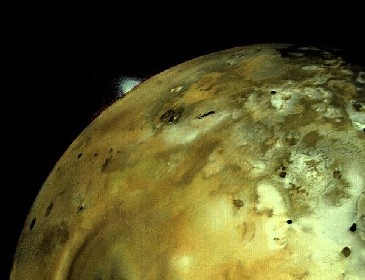 Another of Jupiter's moons is Io, which may be the most colorful moon in the solar system. Io is certainly the most volcanically active moon, even more so than the planet Earth. This picture shows a volcano erupting, throwing solid materials 100 miles high.
Fun Fact: Molten rock is constantly re-forming the surface of Io. In fact, scientists observed one volcano move 50 miles across the surface of Io in the span of just 17 years.
Photo source: NASA 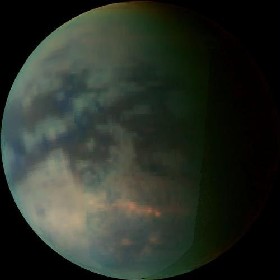 Orbiting Saturn is an orange moon called Titan. Its orangey color is due to the high concentration of nitrogen and other hydrocarbon elements in Titan's atmosphere. In 2005, the Huygens probe arrived at Titan. The probe landed on solid ground near a large liquid sea made of either liquid methane or ethane.
Fun Fact: Titan is the only moon in the solar system with a thick atmosphere.
Photo source: NASA 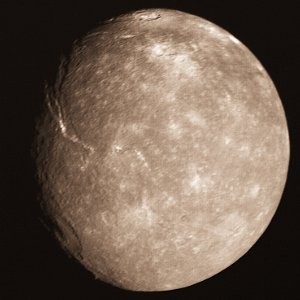 Titania is the largest of Uranus' 15 moons. The surface is made of rock and ice and has many deep canyons.
Fun Fact: Most of the moons of Uranus were named after characters in Shakespeare; Titania comes from A Midsummer Night's Dream.
Photo source: NASA 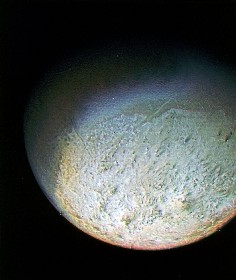 Neptune's main moon is one of the coldest places in our solar system. It's so cold on Triton that even nitrogen freezes and sits as ice on the surface.
Fun Fact: Triton orbits Neptune in the opposite direction of that planet's rotation. This is called a retrograde orbit. Triton is the only large moon in the solar system with a retrograde orbit around its planet, leading scientists to believe that Triton formed elsewhere and was captured by Neptune's gravity long ago.
Photo source: NASA