Our Solar System (in order from the Sun)

Our solar system consists of a bright yellow star, eight planets, nearly 150 moons, and thousands of smaller objects like asteroids and comets. If you wanted to see all eight planets from the Earth, all you need is a clear night and a pair of binoculars. That is basically how early astronomers observed the heavens before the invention of large land telescopes and then later space exploration itself. The development of orbital telescopes, such as the Hubble Space Telescope, and interstellar probes has enhanced our knowledge of the universe enormously. Follow this slideshow for fantastic images and information about our solar neighborhood. 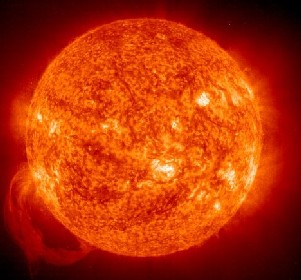 The star at the center of our solar system is called the Sun, or Sol. It is one star in a galaxy of more than 200 billion stars. The Sun and solar system rotate with the rest of the galaxy at about 175 miles per second. That means it takes about 240 million years for the Sun and our solar system to rotate all the way around the galaxy.
Fun Fact: Scientists predict that in about eight billion years, Earth will be destroyed by the expansion and then death of the Sun.
Photo source: NASA

The first planet from the Sun is Mercury. This planet, appropriately named after the Roman messenger of the gods, zips all the way around the Sun in 88 days—that's about 30 miles every second. This image was taken by the Mariner 10 probe on 24 March 1974. The next probe sent to Mercury is set to arrive in 2011 and will completely map the surface of the planet.
Fun Fact: Mariner 10 was 3,340,000 miles (5,380,000 km) away from Mercury when this picture was taken. Not exactly a close-up!
Photo source: NASA 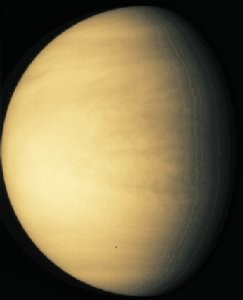 The second planet from the Sun is Venus—a planet similar in size and mass to Earth, which is why Venus is sometimes referred to as Earth's sister planet. The climates of Venus and Earth are completely different, however. Venus is a very hot place, due to its close proximity to the Sun and its very thick layers of clouds. When heat from the Sun reaches Venus, its massive cloud cover traps and keeps much of that heat within the planet. This trapping of the Sun's energy is called the greenhouse effect. Sound familiar?
Fun Fact: After the Sun and the Moon, Venus is the brightest object in Earth's sky.
Photo source: NASA 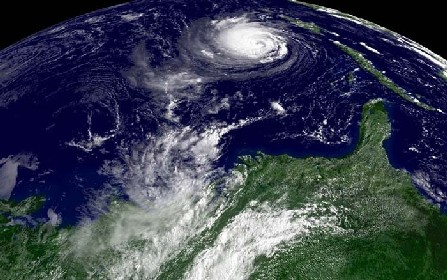 The story of Goldilocks and the Three Bears is also the story of Earth. It's a place that is neither too hot, nor too cold, but is just right for all sorts of life-forms to live and thrive. There are moons in the solar system that could potentially support life, but as of 2008, Earth remains the only planet where life is known to exist.
Fun Fact: Is that Florida in the picture? Yes it is. This image was taken by an Earth-orbiting satellite as it was tracking Hurricane Isabel in 2003.
Photo source: NASA 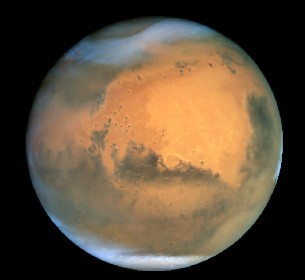 The fourth planet from the Sun is Mars. This picture was taken by the Hubble Space Telescope when the planet was 43 million miles (68 million km) away from Earth. Two large storms are visible in this picture: one high above the northern pole, and another in the lower right portion of the planet. Astronomers want to understand the weather patterns on Mars in preparation for future missions to the red planet.
Fun Fact: Mars has an elliptical orbit, which periodically brings it within 35 million miles of Earth. The next such close encounter between the two planets will occur in the year 2287.
Photo source: NASA 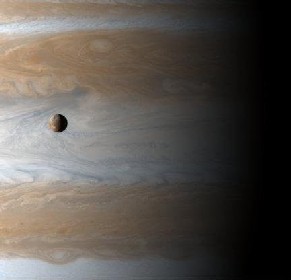 Fifth from the Sun is the largest planet in our solar system, Jupiter. Its diameter is 11 times that of Earth. Jupiter is also two and a half times as massive as all the other planets in the solar system put together. Sulphur, ammonia, and phosphorous compounds make up quite a bit of the planet's atmosphere. The only solid part of Jupiter is its small rocky core. This picture was taken by NASA's Cassini spacecraft on 1 January 2001. Notice the small sphere in the foreground, that's Jupiter's moon, Io.
Fun Fact: Io is about the same size as Earth's moon.
Photo source: NASA 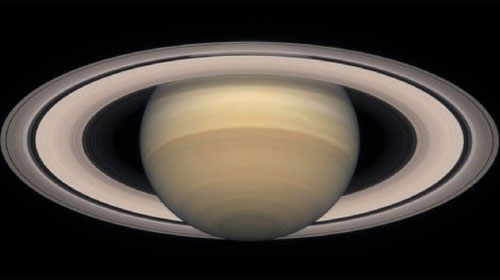 The sixth planet from the Sun is the majestic Saturn. It takes 29 years for Saturn to make one trip around the Sun. Orbiting this giant, gas-filled planet are its famous rings. The rings are a collection of billions of boulder-sized chunks of ice. Saturn's intense gravitational field keeps its icy rings from clumping together.
Fun Fact: Saturn rotates rapidly, making each day only 10 hours long.
Photo source: NASA 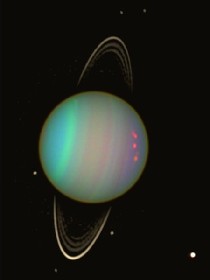 Next on our journey is the seventh planet of the solar system, Uranus. This picture shows the planet's faint rings and a few of its moons. The bright spot on the lower right corner is the snowy white moon named Ariel. The rings of Uranus were first discovered in 1977, before then Saturn was thought to be the only planet in the solar system with rings. Since discovering Uranus' rings, astronomers have found rings around all of the gas giants: Jupiter, Saturn, Uranus, and Neptune.
Fun Fact: Uranus is much farther away from the Sun than Saturn. While Saturn takes 29 years to make a single orbit around the Sun, Uranus takes 84.
Photo source: NASA 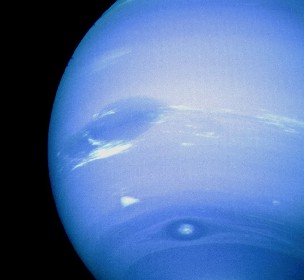 The eighth and last planet of the solar system is Neptune. The deep blue color of the planet is caused by the high concentration of methane in its atmosphere. This picture of Neptune was taken by the Voyager 2 spacecraft in 1989.
Fun Fact: The winds on Neptune are the fastest in the solar system, blowing at 1,250 mph (2,000 kph).
Photo source: NASA