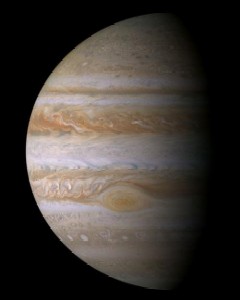 A belt of asteroids (fragments of rock and iron) between Mars and Jupiter separate the four inner planets from the five outer planets.

Jupiter, the largest planet in our solar system, was named for the most important Roman god because of its size. About 1,300 Earths would fit into it. Viewed through a large telescope, Jupiter is stunningly colorful—it is a disk covered with bands of blue, brown, pink, red, orange, and yellow. Its most distinguishing feature is “the Great Red Spot,” an intense windstorm larger in size than Earth, which has continued for centuries without any signs of dying down.