Theories of the Universe: How Many Dimensions Are There?

How Many Dimensions Are There?

In the page about extra dimensions, we saw how the extra dimensions in supersymmetry allowed for the extra rotation that fermions required to get back to their original starting point. In superstring theory the extra dimensions play a different role. But are there eight dimensions as in SUSY, or five, as described by the Kaluza-Klein theory? Maybe there's more? Well as it turns out there are a different amount of dimensions for each of the two basic groups of particles. Do you remember what those are? The fermions make up matter, and the bosons carry the force charges.

Modular functions were first discovered by the Indian mathematical genius Srinivasa Ramanujan. He has been compared to a bursting supernova, illuminating the darkest, most profound corners of mathematics, before being tragically struck down by tuberculosis at the age of 33. Scattered throughout his notebooks are sets of very obscure equations called modular functions. These are some of the strangest equations ever found and appear only in distant, unrelated branches of mathematics. One of these modular functions, called the Ramanujan function in his honor, appears in string theory as the underlying mathematical theory that shows how strings vibrate in 10 and 26 dimensions. 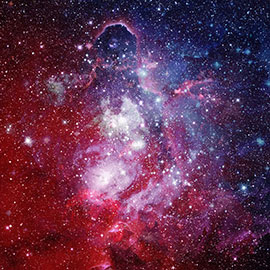 If we begin with just one extra dimension, as in the Kaluza-Klein theory, that one dimension is a simple curled-up circle, very similar to our second dimension that we found upon close inspection of our garden hose. Each dimension that is added changes the geometric shape of the curled-up dimension. But in principle, whether it's one or ten extra dimensions, the concept of them being curled up and hidden, as opposed to being large and extended is still the same.

So to answer our question “How many dimensions are there?” we could say, “As many as it takes to make the theory work.” There could be an infinite number of dimensions. But as it turns out, at least for SST, 10 dimensions work for fermions and 26 dimensions work for bosons. Remember that a particle is defined by the particular vibrational pattern is has and that pattern is defined by the shape of the space in which it vibrates. It was found that the vibrating waves of fermions travel clockwise using 10 dimensions and the vibrating waves of bosons travel counterclockwise in 26 dimensions. This is one of the most unusual aspects of the theory and also one of the least understood. The mathematical theory of modular functions is where this is all explained. But no one has the slightest understanding why 10 and 26 dimensions are singled out as the dimensions in which strings vibrate.

The Short Version of the Second Superstring Revolution

Most of this section has been devoted to explaining the fundamental concepts found in the first superstring revolution. In this last section, I would like to summarize for you the main points of the second revolution in string theory. The essential concepts that you learned about string theory in the previous pages still lie at the core of this second revolution, but there have been some subtle additions that are too technical to go into. So for the sake of your brain and mine, I'll just define for you what has happened.

By the late 1980s and very early '90s, string theory was definitely the theory that everyone felt would eventually lead to the TOE. There were just two basic problems with it.

However, in 1995, which is considered to be the date for the start of the second superstring revolution, some great new developments were introduced to resolve the two problems mentioned above. As it turns out, the equations that define each of the five versions are very intimately related. So rather than having five distinct versions, physicists are convinced that there is one theory that brings all five together under one umbrella. Picture a five-pointed star, like a starfish, with one of the five versions at each tip and you have the new model for SST called M-Theory. And although there is still a lot of work to be done, we can summarize two of its chief features.

Just one final thought before we close this section. Although SST gives us a compelling formulation of the theory of the universe, the fundamental problem is that an experimental test of the theory seems beyond our present day technology. In fact, the theory predicts that the unification of all forces occurs at the Planck energy, or 1019 billion electron volts, which is about 1 quadrillion times larger than energies currently available in our accelerators. This can be a little disappointing, because it means that experimental verification, the engine that drives progress in physics, is no longer possible with our current generation of machines or with any generation in the conceivable future. But be that as it may, the true nature of M-theory remains mysterious, which is one of the suggested meanings for the M. Acquiring a full understanding of M-theory could well be the Holy Grail of the twenty-first-century physics.