Theories of the Universe: The Second Requirement, Extra Dimensions

Okay, you now have one of the most important parts of string theory under your belt. But you're not off the hook yet. There is another important point we need to discuss and this point is equally significant. (I know, you thought I said the last section was the most important. It is, but so is this section.) We'll start by stating exactly what this other requirement is and then work backward from there. As in SUSY, extra dimensions are required for SST. 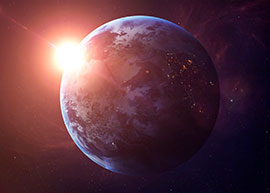 The difficulty in describing the extra dimensions that are needed in SST lies in the ability to express their geometrical form. These extra dimensions are not just crumpled up any old way. In 1984, four physicists showed that the extra six dimensions needed can be described using what's called a Calabi-Yau shape. The name is derived from the two mathematicians, Eugenio Calabi and Shing-Tung Yau that developed the model. The closest I can come in telling you what it looks like is that it resembles the famous “Gordian Knot” that Alexander the Great unraveled with one swipe of his sword. Just imagine an incredibly complex ball of twine and you'll get a good visual image, though still not an accurate representation.

You already know that the vibrational pattern created by the strings defines the type of particle it is. But what physicists found was that these patterns needed more than our three dimensions of space to express all of their possible patterns. In a sidebar, I recently explained that after the moment of the big bang, four dimensions uncurled and many other dimensions didn't. They remained curled up. It is these uncurled dimensions that are necessary for the patterns of the strings to vibrate in. Let me reword this a different way for clarity.

All of the possible vibrational patterns that strings can assume are constrained and strongly influenced by the shape of the extra dimensions that are twisted up and curled back on each other. This means that the extra-dimensional geometry determines the fundamental physical attributes, like particle masses and charges, which we observe in the usual three large space dimensions of the everyday world. In other words, the vibrational patterns that define each type of particle are based on the shape of the extra dimensions that the string vibrates in. Got it?

What do these curled up dimensions look like? That's harder to describe than anything else we've discussed so far. There are very exotic names given to the unusual forms that these curled up dimensions can take. And they're too lengthy and mathematical to explain here. But I think I can give you a good idea of how just one extra dimension is possible to imagine, so let's see what that looks like.

The idea that our universe may have more dimensions than meets the eye originated in 1919 with a German mathematician by the name of Theodor Kaluza. Oscar Klein, a Swedish physicist, later refined it when he applied it to quantum theory. They introduced the idea of a five-dimensional model to unify gravity and electromagnetism. In the same way that gravity ripples space in four dimensions, the Kaluza-Klein equations showed that electromagnetism ripples in the fifth dimension. But where is this fifth dimension? The standard explanation is that the fifth dimension is hidden from us by compactification. Over the next couple of paragraphs you'll get a good idea of what this term means.

Kaluza first proposed his theory to Einstein in 1919, who upon reading it was initially impressed, but upon careful reconsideration felt that the notion of an extra dimension was too unprovable. However, two years later, after he digested the theory more fully, he gave it his full support. And even though it's called the Kaluza-Klein theory, the two of them never worked together on it.

The most common analogy used to describe this extra dimension is that of a garden hose. If you stretch a long garden hose across a gorge, from a distance it looks one-dimensional. The actual thickness of the hose would not be evident from a distance. And if there were a bug crawling on it, and someone wanted to know where it was, you would only have to tell him its location based on one dimension, left/right. But now, if we view the hose with a powerful pair of binoculars, we see that the hose actually has thickness to it. The bug on the hose has in reality two choices facing him when he moves. He can move left/right or clockwise/counterclockwise in a circular motion around the hose. So from a distance what appeared to be one-dimensional, upon much closer examination is revealed to be two-dimensional. And this is the central point of the extra dimensions, and part of the Kaluza-Klein theory. One of the dimensions is long, extended, and easily visible, just like the four dimensions we live in all of the time. But the other dimension on the hose is short, “curled” up and can only be discovered with much greater precision. This is the dimension that is hidden from our normal experience and is compacted into tiny, curled-up shapes.

In the last section, I introduced you to the idea of “quantum foam.” When we looked at the quantum universe, magnified almost to the Planck scale, we saw that the uniform smoothness of space warped by gravity was a boiling, frothing area of space far different than that created by gravity alone. So how does SST get rid of that quantum foam? If you can imagine a birthday cake that just had the icing put on it, it's rather lumpy and chaotic. But with the use of a large butter knife, you can “smear” the roughness out into a smooth surface. This is essentially what the tiny, curled-up extra dimensions do. Because of their geometric shape, they can “smear” the quantum foam, more or less, into the smoother surface reflected in the forces of gravity.

While most of the extra dimensions in SUSY and SST are spatial dimensions, some theorists think that to arrive at a full understanding of a primary theory that will completely de-scribe and unify the microcosm with the macrocosm, some extra time dimensions will be required as well. For example, a time dimension applied to the spin of a particle could allow it to rotate through its full revolution so that it would return to the same moment in time it was at before it began its rotation. You could think of it as a particle starring in its own version of the movie Groundhog Day.

If we magnify an area of space almost to the Planck scale, we see that it is made up of tiny, curled-up shapes, the extra dimension of the Kaluza-Klein theory. Of course in their theory, there is only one extra dimension, but I think you have a good idea of how this one dimension is described. So to reiterate their theory one more time: The spatial fabric of the universe can possibly have two types of dimensionality, the large, extended, easily visible dimensions that we operate in, three of space and one of time, and the hidden, curled-up, circular dimensions. This is a new dimension, but one that exists curled up at every point in space in the familiar larger dimensions. In the same way that you can move, up/down, left/right, forward/backward in three dimensions, if you were small enough you could also move in the other dimension as well.