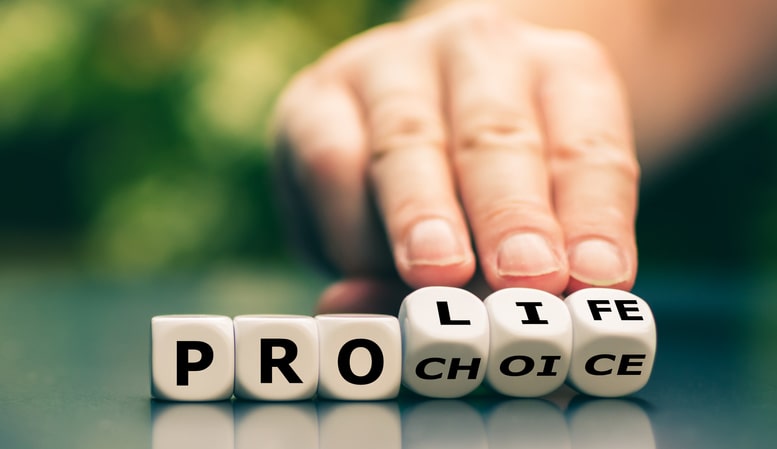 The U.S. Supreme Court, founded in 1789, is the highest federal court in America. Located in Washington D.C., it has final jurisdiction over all federal and state court cases.

Abortion is the act of deliberately terminating a pregnancy by removing or destroying the embryo or fetus.

However, the issue is extremely complex, with opinions influenced by many factors particular to each individual. Debate is often highly charged with emotion.

Contentions over women’s rights, and indeed abortion, have existed since the earliest civilizations. In America, abortion ‘pre-quickening’ (before the mother felt movement) was legal under English Common Law until 1821, when Illinois became the first state to criminalize abortion at any stage. By the mid-1800s, all US states had banned abortion.

The history of the Supreme Court has seen many landmark cases that have shaped American life over the last two centuries. It consists of a Chief Justice (John Roberts) and eight associate justices who all serve life tenures.

The Supreme Court and Abortion

For most of America’s existence, each state made its own abortion policy under its state laws. That was until the early 1970s, when the Supreme Court chose to hear two abortion cases that challenged a state’s abortion laws: Roe vs Wade and the lesser known Doe v. Bolton.

One of the most well-known abortion rights cases is the one involving Roe v. Wade, which set many of the precedents to this day.

What is Roe v. Wade?

Roe vs Wade is one of the most significant and divisive cases ever heard by the Supreme Court. It centered around a woman, given the fictitious name of Jane Roe (real name Norma McCorvey), who wanted to terminate the pregnancy of her third child. However, abortion was illegal in her state, Texas, except to save a woman’s life. In 1970, she challenged a local attorney, Henry Wade, on the grounds that denying a woman’s right to abortion was unconstitutional.

After the District Court of Northern Texas ruled in her favor, the case was submitted to the Supreme Court.

A decision was reached in January 1973; the Supreme Court ruling in favor of Roe with a 7-2 majority opinion. Justice Harry Blackmun wrote the court’s opinion. It stated that a pregnant woman’s decision on whether or not to terminate is protected under a ‘right of privacy’. It was, he argued, constitutionally grounded in the Fourteenth Amendment’s guarantee of liberty.

However, the Supreme Court’s ruling did not grant absolute abortion rights. The court recognized that the government also had a responsibility to protect potential life. To balance these constitutional forces, Blackmun devised a three-tier system of abortion rights, linked to the three trimesters of pregnancy.

In the first trimester, the state could not intervene in a woman’s decision to abort a pregnancy, other than to ensure it is done by a medical professional. Aborting a pregnancy at this stage, Blackmun argued, carried less risk than childbirth. Thus there would be no need for the state to limit access to protect a mother’s health.

The second tier concerned the time from the end of the first trimester to ‘viability’, the time when the fetus could survive outside of the womb (usually after 24 weeks of pregnancy). This allowed a degree of state intervention, but only to aid in the protection of the mother’s health.

The third tier involved the time following viability. Blackmun stated that after this point, the state has an interest in protecting the health of the mother and the potential life of the unborn child. It gave states the power to ban abortion after this stage, except when the mother’s life was at risk.

In his draft opinion, Blackmun acknowledged the highly complex and sensitive nature of the issue, and the deep emotional responses it elicited on both sides. The ruling by no means settled the debate over abortion rights in America, and the Supreme Court has heard many cases around abortion in the time since Roe v. Wade.

Until 1989, none of those cases had a significant impact on the ruling. That changed when a Missouri statute involving abortion restrictions was brought before the Supreme Court.

Though it didn’t ban abortions outright, it prohibited the use of government employees, facilities, and funds from being used in abortions, except when the mother’s life was at risk, thus limiting abortion access.

The case was rejected by the District Court and Court of Appeals, but William Webster, Missouri Attorney General, submitted it to the Supreme Court.

The court ruled in favor of Webster with a narrow 5-4 decision. The decision was met with fury by Harry Blackmun, who accused other justices of underhand tactics.

The case signaled a shift in the Supreme Court’s attitudes to abortion restrictions and paved the way for more changes to the framework created in 1973.

The first case that led to significant changes to the Roe v. Wade ruling was Planned Parenthood v. Casey in 1992.

While it maintained the core principle of Roe v. Wade - that the state had no right to restrict ‘pre-viability’ abortions - it replaced Blackmun’s three-tier system with a viability analysis which gave states greater scope to influence reproductive rights earlier in pregnancy.

Partial-birth abortion (known medically as intact dilation and extraction) is the political term for a rarely-used form of abortion. It involves the termination of a living fetus after being partially removed from the mother’s uterus, usually in the later stages of pregnancy,

It was first brought to the Supreme Court in the Stenberg v. Carhart case, after the state of Nebraska criminalized the procedure. In 2000, a physician and abortion provider named LeRoy Carhart argued that the law was unconstitutional, and the Court upheld his view.

However, in 2003, George W. Bush signed into law the Partial-birth Abortion Ban Act, which banned the procedure and subjected physicians who performed it to fines and imprisonment.

Then, in 2007, Gonzales v. Carhart addressed the issue again, with alterations made to account for the 2003 law. This time, the Supreme Court, with new Justices Samuel Alito and John Roberts on the majority, ruled that the Partial-birth Abortion Ban Act was constitutional.

The ruling was significant in that it did not include any exceptions on the grounds of the mother’s health. Indeed, the Court’s opinion stated that the procedure was never necessary to protect a woman’s health.

The case was seen as a major victory for those who opposed abortion and led to many states moving to increase their abortion restrictions.

Since 2013, several states have prohibited abortions after 20 weeks, based largely on the theory that a fetus has a sufficiently developed nervous system to experience pain during an abortion.

However, this theory is disputed among doctors and scientists who support abortion. Furthermore, as a fetus is not considered viable at 20 weeks, opponents argued that it violated constitutional rights to terminate before viability.

Abortion Rights: Where Do We Stand?

In 2018, the state of Mississippi banned abortion before 15 weeks of pregnancy. The only abortion clinic in Mississippi challenged the state’s ban as unconstitutional in the Dobbs v. Jackson Women’s Health Organization case. The lower courts upheld the challenge, agreeing that the state had no legitimate reason to ban abortion pre-viability.

However, Mississippi submitted the case to the Supreme Court, which had recently appointed Justices with a history of opposing abortion: Brett Kavanaugh and Amy Coney Barrett, both nominated by Donald Trump.

Indeed, on June 24, 2022, Justice Samuel Alito upheld the Mississippi law and declared the Court’s judgment that abortion was not protected under the constitution. He challenged the historical accuracy of the assertions made in Roe v. Wade. It overturned the 1973 ruling and deferred the regulation of abortion back to the states.

The ruling has divided America. Even before the ruling was declared, protests erupted due to a leaked document. Many states, including Alabama, Oklahoma, Louisiana, Wisconsin, and West Virginia, moved immediately to bring in laws banning or severely restricting abortion, while states that supported abortion moved to make abortion more accessible.

The ruling has led to huge concerns around the healthcare of women, particularly those in states with strict abortion restrictions. Women whose pregnancies could cause significant harm to their physical or mental health are now at risk of the consequences. They may need to travel great distances to other states to access safe healthcare.

It’s also likely to hit those already marginalized the hardest. In many states that have banned abortion, people of color are the minority of the population but account for a significant majority of abortions carried out. For example, in Mississippi, people of color make up 44% of the population, but 80% of abortions are received by women of color.

Furthermore, those living in poverty in anti-abortion states will not have the means to travel to other states for treatment. They could also have limited access to reproductive healthcare in their own state.

The ruling may also have a wider impact on society. In their dissenting statement, Justices Breyer, Kagan, and Sotomayor argued that abortion rights were linked to other constitutional issues such as bodily integrity and familial relationships, involving such rights as the purchase of contraception and same-sex marriage. Their statement suggested that other constitutional freedoms may come under threat.

The abortion debate in the US looks set to remain as fierce and divisive as ever. Both sides of the debate have doubled down on their arguments.

Some anti-abortion states, predominantly Republican, are seeking even tighter restrictions, with some trying to limit access to medication abortions as well as surgical ones.

On the other hand, some Democratic states that support abortion have sought to make it easier for women to access care. State lawmakers have given abortion rights legal protection, while other measures such as increased public funding for abortion and reducing insurance fees for abortions have been employed.

The private sector also moved to support people affected by the Supreme Court’s decision. Google said it would delete the location data of women who traveled to abortion and fertility centers, and hundreds of corporations and businesses pledged financial support for their employees who needed to go out of state for reproductive care.

Abortion continues to occupy a prominent position at the highest level of politics. On July 8, 2022, President Joe Biden signed an executive order that gave some protection to reproductive rights, but stopped short of restoring access that had been lost due to the overturning of Roe v. Wade.

Biden acknowledged that his powers were limited. He encouraged people who wanted to restore abortion rights to use their vote in the United States elections in November 2022 to elect lawmakers who could make it happen.

The abortion debate is sure to feature heavily in the campaigns leading up to the election, and will undoubtedly continue long afterward.

With such complex and sensitive issues, it’s vital to view things with empathy and open-mindedness, as much of the information found online is not objective.

A good starting point is this key-facts summary of the abortion debate by Pew Research. It breaks down the nuances of the arguments and shows how opinions are divided.

You can also find out more about abortion worldwide with the Guttmacher Institute.