Not that plotting points isn't fun, but it gets old kind of fast. So, let's up the ante and graph some lines, which are only slightly more complicated. Lines are the graphs of linear equations, which are equations that are in this form: ax + by = c. In other words, they're equations that contain x and y (with coefficients attached) and a number without a variable, called a constant.

Back in Solving Basic Equations, you solved simpler linear equations like 2x - 1 = 15; they're simpler because they only have one variable in them. For example, it's pretty easy to figure out that the solution to the equation 2x - 1 = 15 is x = 8. However, when there are two variables present in an equation, a nutty thing happensnow there's not just one solution, but an infinite number of solutions!

Take a look at the linear equation x + y = 9, which translates to "What two numbers add up to 9?" There are many pairs of numbers x and y that could make that statement true. If x = 1 and y = 8, you get 9. How about x = 11 and y = -2? Those two numbers add up to 9 as well! How can you possibly give a solution to this equation when there are so many dang answers?

The best thing to do is to write each set of solutions as an ordered pair and plot them on a graph. For example, given the two solutions I just came up with, I can create the points (1,8) and (11,-2).

Here's the cool thing: All of the solution points, not just the two I pointed out, but all of them, will make a perfectly straight line in the coordinate plane, and that line (since geometry tells us that a line is made up of an infinite number of points) represents the infinite number of solutions to the linear equation. Finally, a math word that makes sense. They're called linear equations because their graphs are lines.

Is x = 7 a linear quation? Yes! I know I said a linear equation has the form ax + by = c, and it's true that the equation x = 7 doesn't have any y's in it, so how can it be linear? You can skirt this technicality by saying that b = 0; in other words, the coefficient of y is 0, so there is a y, but there's no use writing it.

If you ever wondered why you had to graph equations, now you know! The graph is just a visual representation of all the ordered pairs (x,y) that, if plugged back into the linear equation, would make it true. Now that you know why you have to make graphs, I'll focus on how to make them.

The easiest way to graph any equation in algebra is to use a table. Basically, you'll plug a whole bunch of numbers in for x and find out what the corresponding y values are to complete the ordered pair. Once you do, you can plot that (x,y) pair on the coordinate plane, secure in the knowledge that it falls on the graph.

Here are the steps to follow to graph a linear equation using a table:

How many x-values should you plug in? Well, geometry tells us that it takes two points to define a line, but if you plot three, you can use the third one to check yourself. If they don't all fall on the same line, then you made an algebra mistake.

Solution: Solve for y by subtracting 2x from both sides and then either multiplying or dividing both sides by -1 to make y positive.

Now it's time to construct the table. The left column will contain some x values to be plugged in. (I usually choose -1, 0, and 1 since they are small, simple numbers.) The middle column is used to perform the calculations, and the right column is used to record the resulting coordinate pair. 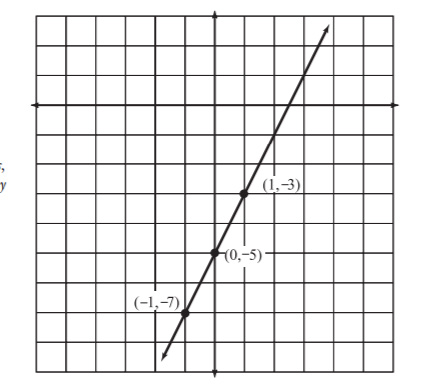 Figure 5.5The line 2x - y = 5 will extend infinitely in each direction. Note that the x-and y-axes do not appear in the exact middle of this graph; since all three of the points occur below the x-axis, I have shifted the focus of my graph there.

The spot (or spots) where a graph intersects either the x- or y-axis is called an intercept. You may have noticed, as you practiced plotting points, that coordinates which fall on the axes will always contain a 0 in them. In fact, a coordinate on the x-axis will always have a y-value of 0, and a coordinate on the y-axis will always have an x-value of 0. This makes calculating intercepts easy. All you have to do to find an x-intercept is plug in 0 for y, and to calculate a y-intercept, plug in 0 for x.

Usually, plugging in 0 for a variable makes students happy, because anything multiplied by that 0 will vanish. So, it's not a very burdensome task. Even better, once you've found those two intercepts, you can plot them and connect the dots to find the graph of the line! 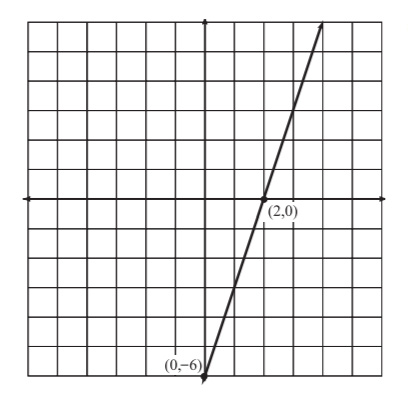 Solution: If you plug in 0 for x and solve, you'll get the value of the y-intercept.

The y-intercept is (0,-6). Now plug 0 in for y (back in the original equation) and solve to get the value of the x-intercept.

The x-intercept is (2,0). Plot the two intercepts and connect the dots to get the graph, pictured in Figure 5.6.