A History of the Supreme Court 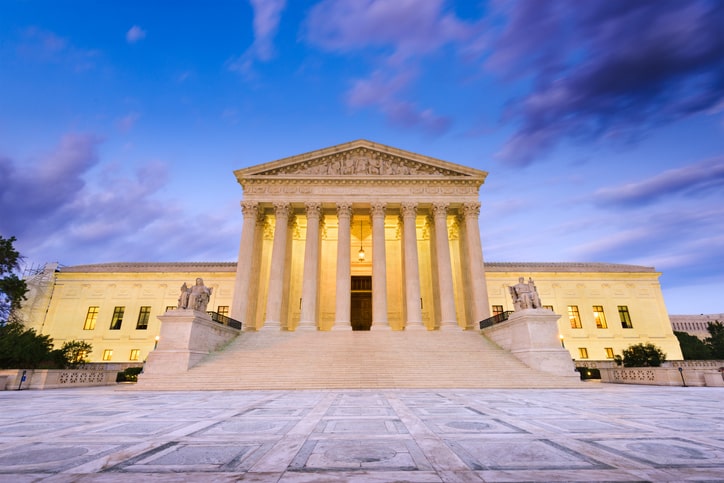 The US Supreme Court has presided over numerous landmark cases, with many having a significant social, cultural and environmental impact on the United States. Here we provide an overview of the Supreme Court’s role, its members, and the various cases that have shaped our country.

What Is the Supreme Court of the United States?

The Supreme Court of the United States is the highest court in the land. It was first assembled on February 1, 1790, and was established in Article III of the US Constitution.

The Supreme Court provides the final authority for all federal court cases (as well as state cases involving points of federal law). Its rulings are final and both government and courts across the country must adhere to them.

Many Supreme Court rulings have cemented basic constitutional rights and provided the foundations of the current justice system.

This early landmark case ruled on who decides what the law actually is. This decision gave the Court the power of judicial review and the ability to strike down laws if they were deemed unconstitutional.

Here, the Supreme Court ruled that "lawyers in criminal court are necessities, not luxuries". As such, the Sixth Amendment right to assistance of counsel was deemed to apply to all state criminal trials with all defendants granted access to free counsel. This led to the expansion of the public defender system across the country.

This case made it a constitutional right for those in custody to be informed of their right to remain silent and to be assisted by an attorney. The court ruled that failure to read these rights could lead to any statements made by the accused to be inadmissible during a trial.

This 5-4 decision made it illegal for states to ban same-sex marriages and meant that states were obliged to issue marriage licenses as well as identify marriages that took place in other states.

Some recent cases have had a significant social, cultural, and environmental impact, including these interesting occurrences.

This case argued over who has the right to enforce regulations on air quality. In 2015, the Clean Power Plan was introduced to regulate carbon dioxide emissions from power plants. Twenty-four states consequently sued the Environmental Protection Agency (EPA) for overstepping its authority and the Supreme Court ruled that the EPA did not have the authority to control greenhouse gas emissions by requiring changes to power production.

Here, a medical doctor was convicted for unlawful distribution of narcotics (i.e. outside the usual course of professional practice). The defendant claimed to have acted in ‘good faith’ and this led to questions relating to standards and elements required for a ‘good faith’ defense. The Supreme Court invalidated the original ruling and remanded the court of appeals’ decisions.

This ruling allowed the Biden administration to end the Migrant Protection Protocols (MPP) program, which returns certain noncitizens to Mexico during immigration proceedings. The Department of Homeland Security (DHS) created the MPP in December 2018 but the decision was made to end the program in June 2021. Texas and Missouri sued, claiming this violated immigration law, with both a district court and the 5th circuit concurring. The Supreme Court overturned this decision and clarified the scope of DHS discretion with regard to immigration policy.

Roe vs Wade began in 1969 after Norma McCorvey (under the pseudonym ‘Jane Roe’) challenged the criminal abortion laws in Texas after becoming pregnant for a third time by an alleged rape. In 1973, the appeal reached the Supreme Court which ruled 7-2 that governments lacked the power to prohibit abortions. In May 2022, the Supreme Court ruled in favor on a ban on abortions after 15 weeks in Mississippi with many states now expected to introduce bans (however, there is still some confusion as to whether this covers ectopic pregnancies).

In order to become a Supreme Court member, the Senate votes on individuals nominated by the President, requiring a simple majority. Justices can hold office for as long as they wish (provided good behavior is observed) and can only be removed by impeachment. Courts of appeals and district courts are split into 13 federal circuits the matters for which the various members are responsible.

Who is the Chief Justice of the United States Now?

The current Chief Justice of the United States is John G. Roberts, Jr., who was nominated by President George W. Bush and took his seat in September 2005. Current US Supreme Court Justices are:

There have been 17 Chief Justices (including the incumbent) over the Supreme Court’s history, all of which were either involved in landmark cases or implemented significant changes.

John Marshall (serving from 1801-1835) served as Chief Justice for a total of 34 years (still the longest tenure). He also served as Secretary of State and helped establish the Supreme Court as the final authority on the Constitution.

William Howard Taft (1921-1930), having been elected president in 1908, was appointed Chief Justice in June 1921. He created the Conference of Senior Circuit (Chief) Judges to oversee court administration and is still the only person to have been both President and Chief Justice.

Earl Warren (1953-1969) was nominated by President Dwight D Eisenhower and is perhaps best known for chairing the Warren Commission report into the assassination of President John F Kennedy. His landmark ruling in Brown v. Board of Education (1954) also ended segregation in public school education.

The US Supreme Court Today

The liberal/conservative split of US Supreme Court members means that major decisions will rarely be unanimous. However, the Supreme Court remains front and center in how the US Constitution is interpreted and, despite recent controversial rulings, is a pillar of American society.