HOW DO WE MEASURE TIME?
DOES TIME BEGIN AND END?
BIOGRAPHY: ALBERT EINSTEIN German, 1879–1955
RELATIVITY
FIND OUT MORE

We use time to say when an event happened or how long it lasted. Time seems to pass at the same rate for everyone, but Einstein’s theory of RELATIVITY shows that time is not constant throughout the Universe.

HOW DO WE MEASURE TIME? 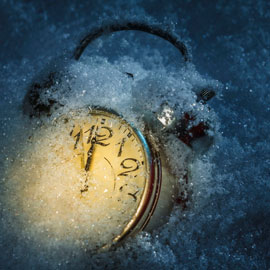 The steady ticking of a clock marks the passing of time. An accurate clock is controlled by something that repeats at a precise, unchanging interval. Early clocks were set by the swing of a pendulum. Modern clocks are set by the vibrations of a quartz crystal.

DOES TIME BEGIN AND END?

Time began when the Universe was created, in the Big Bang about 14 billion years ago. The Universe is currently expanding. Scientists are not sure if the Universe will expand forever, so that time never ends, or if it will collapse in a “Big Crunch,” stopping time for good.

Einstein’s theory of relativity states that time is not the same for everyone. Time passes more slowly if you are traveling very fast, almost at the speed of light.

HOW DOES RELATIVITY WORK?

SHORTCUT THROUGH SPACE AND TIME

Scientists have shown that, in theory, two distant parts of the Universe could be linked by a tunnel through space and time called a wormhole. A wormhole might work as a time machine. By making a round-trip journey through the tunnel, you could arrive home before you left.