On Feb. 7, 2016, the Denver Broncos beat the Carolina Panthers, 24-10, in Super Bowl 50. It was Denver's third Super Bowl win in franchise history, having previously won in 1997 and 1998. The Super Bowl 50 victory, which was never close, came just two years after Denver lost badly in Super Bowl XLVIII to Seattle, 43-8. In 2016, at age 39, Broncos Quarterback Peyton Manning was the oldest quarterback to ever play in a Super Bowl. He also became the first quarterback to lead two different teams to Super Bowl victories. In the days leading up to Super Bowl 50, rumors increased that it would be the last game of Manning's legendary career. However, Denver's defense was the big story of Super Bowl 50, scoring a touchdown early on and keeping the Broncos ahead for the entire game. Broncos linebacker Von Miller was named Super Bowl MVP. Here's a look back at the closest Super Bowls. 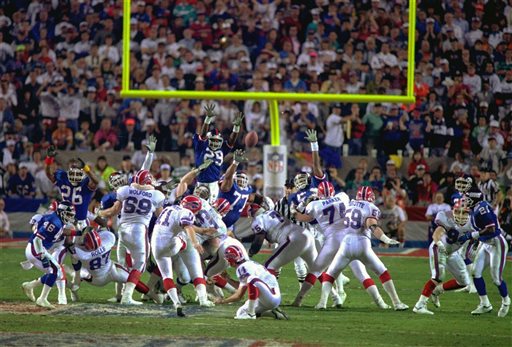 On Jan. 27, 1991, The New York Giants won when Buffalo Bills kicker Scott Norwood missed a field goal in the final seconds of the game. It was the second Super Bowl victory for the Giants and the only Super Bowl so far to be decided by one point. The game was played during the Gulf War so a strong sense of patriotism was present, especially during Whitney Houston's memorable pre-game performance of "The Star-Spangled Banner."
Photo source: AP Photo/Phil Sandlin, File